I don’t understand people who don’t love cheese. I like cheese shops more than I like shopping malls. So many options, so many opportunities to combine them with wine (crucial point here), and samples—so many samples. I could feed myself feasible for several days by stalking sample-giving cheese counters in NYC. I shouldn’t, but I could. It’s important to always have an emergency plan.

Grilled cheese is one of Katie’s favorite foods. It’s easy to make, comforting, and hearty. It’s not normally a go-to dinner choice, but that gives me the opportunity to transform it into a brand-new cheddar-laden invention of my own.

Inspired by a recent episode of Chopped where they only used leftover foods that are normally tossed out, I opened my fridge last night with the intention of finishing off as many half-used products as possible. My fridge is notorious for “half” foods. Half a Styrofoam container of brown rice, half of a box of leftover restaurant pasta, half of yogurt container…half of a cookie when I was only in the mood for one bite. Sometimes the second bite ruins it.

Yes, I was inspired by an episode of Chopped. And yes, I binge watch the show on Netflix like an addict. I get a shameless high whenever I shout out a suggestion that ends up being used by one of the frazzled contestants. It’s like I’ve contributed my share to the world of timed cooking TV.

In my fridge I found a bushel of half-browned (once fresh) mint, 2 loose carrots, a few stalks of celery, ¾ of a cucumber, a dwindling block of cheddar cheese, a nearly empty carton of goat cheese from the Union Square farmers market, a shriveled up onion and a handful of cherry tomatoes. I also had a few fresh chives from my window flower pot that were recently planted, which means that I could pick them before my lack of a green thumb turned them into brown mush. From this, I would create cheese bliss. All I needed to buy was a new loaf of bread and a lemon. Sustainable success.

-1/2 of a yellow onion, loosely chopped

-A handful of cherry tomatoes, cut into 3-4 pieces each

-Butter and olive oil for cooking

-3/4 of a cucumber, sliced and cut into pieces

-A few extra cherry tomatoes for each salad

-Juice from ½ of a large lemon

In a small saucepan, add a little olive oil and put over low-to-medium heat. After a minute, add the minced garlic and cook until it starts to sizzle. Add the cherry tomatoes, and cook for a few minutes until they almost form a blush coating on the bottom of the pan. Remove from the heat and set aside on a plate, making sure to scrape all pan juices and garlic onto the plate with a rubber spatula.

In the same saucepan, place back over the heat and add a little more olive oil. Toss in your onions and cook for several minutes, stirring and flipping, until they become well caramelized. Set aside with the tomatoes.

Lay out two pieces of bread and cover with thick slices of the cheddar cheese. Next, spread a heaping spoonful of goat cheese evenly over each piece (1 spoonful per sandwich). Sprinkle a few chopped chives over the sandwiches. Next, cover each sandwich evenly with the cooked tomatoes and pan juices, topped with the caramelized onions. Cover each sandwich with the other piece of bread.

In a large frying pan, add butter and place over medium/low heat. Once it sizzles slightly when flicked with water, add your sandwiches side-by-side. Cover the pan with a lid to speed up the melting of the cheese. After the sandwiches are browned on one side, carefully flip them over with a large spatula, adding a little more butter to the pan for the second side. Press down on the sandwiches with your spatula. Replace the lid and cook until they are browned and the cheese is melted. 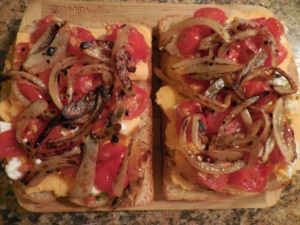 Serve alongside the (now marinated) salad. The sandwich will satisfy all levels of comfort food cravings, between the hearty and tangy cheeses and the savory addition of the tomatoes and onions. After biting into that filling, butter-laden crunch of a sandwich, try a forkful of the super light and refreshing summer salad. If you are tempted to add dressing, hold off until you try a few bites. It’s surprisingly tasty on its own. I drink the remaining lemon juice at the bottom of the bowl at the end, which has since mixed with vegetable juices and the aroma of mint.

Being a grown-up can be cool sometimes.