The next day, we chose to take a day trip with my family to a little town called Winchester, which is about an hour from London by train. London is an incredible city, but we craved exploration and a low-key change of scenery. Katie’s uncle lived in Winchester for many years, so the two of us have been before. The town of 45,000 is seeping in history, home to historic sites such as Winchester Cathedral (the burial site of Jane Austen) and The Great Hall of Winchester Castle. Attractive architecture and tiny shops line the main street, which boasts dozens of restaurants and pubs for perusing. 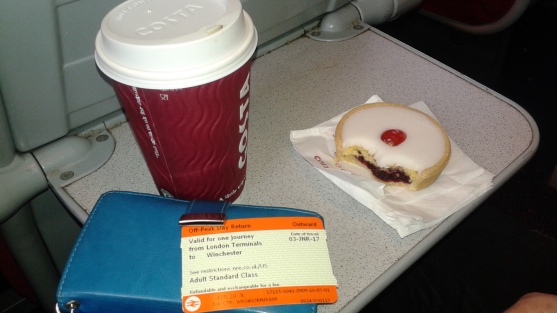 We hopped the train and watched as the city lights faded and were replaced by rolling green hills and farmhouses. The transition was sedative. The train station is right in town, and there is no need for a car unless you are exploring the outskirts. We strolled through the bustle of shops on the main street and explored the remains of Winchester Castle first. The Great Hall is the only major structure still standing, but outside you can venture into underground passages and view ruins of the medieval buildings. Inside The Great Hall is home to the famous Winchester Round Table, inspired by King Arthur’s Court. It was surreal to conceptualize the age of the buildings and artifact itself—which they believe was built in the early 1200’s as a wedding gift for Edward I’s children. 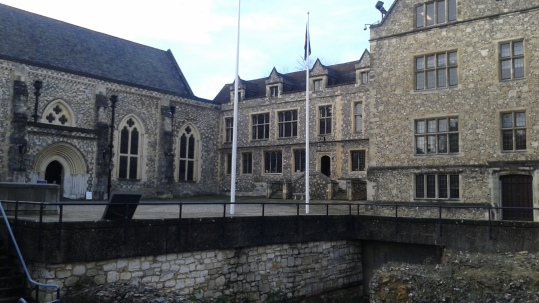 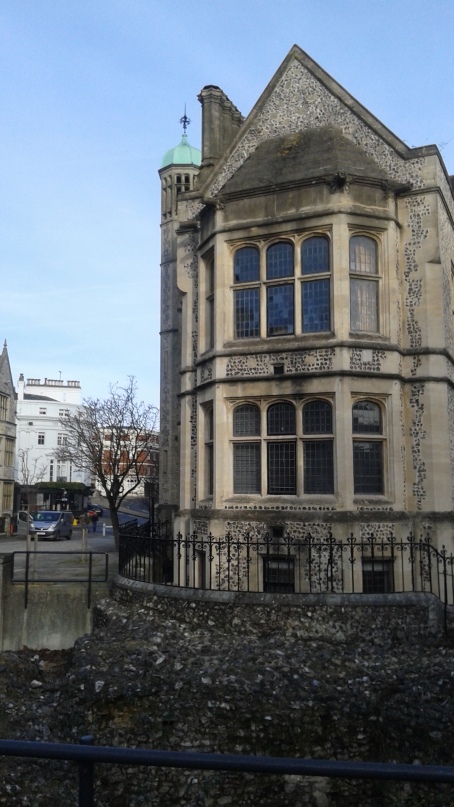 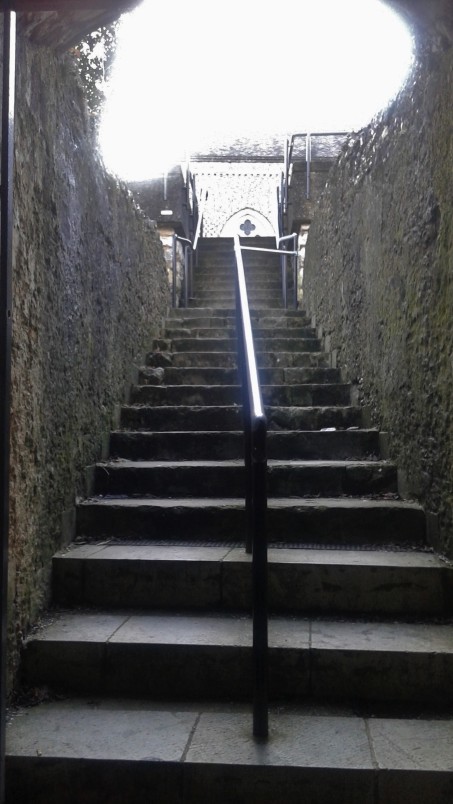 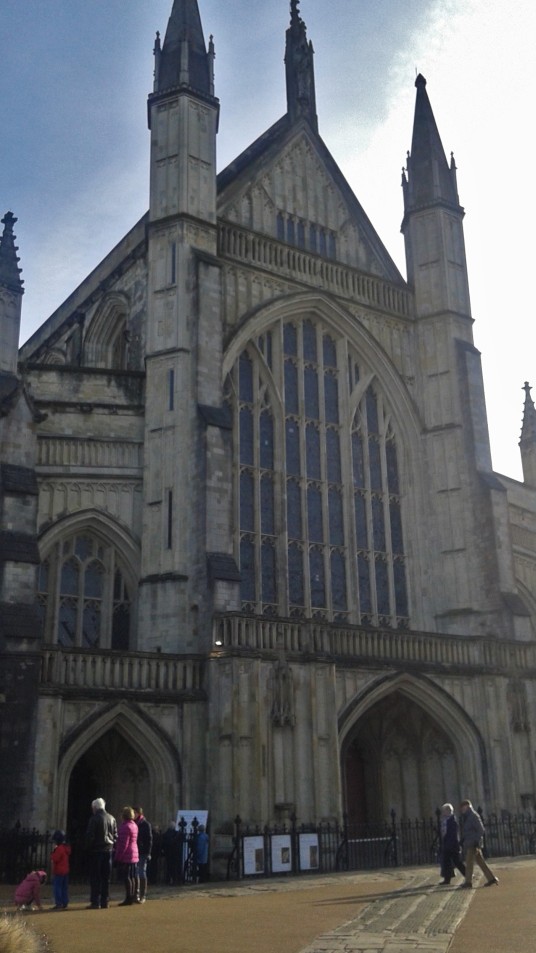 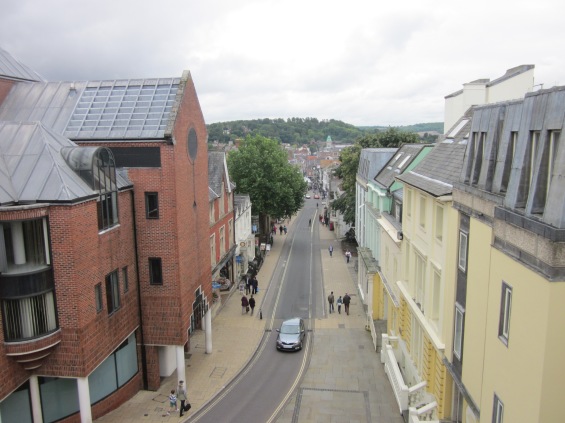 After playing with the dress-up garb and plastic swords in a box in the corner, meant for visiting children (our emotional spirit animals), we went on to gawk at the sweeping sand-colored walls of Winchester Cathedral’s exterior before we were ready to stop for a pint. It was 12:04pm which is far too late for morning coffee. To the pub—kicking and screaming.

On the outer edge of town is an old pub called Black Boy, which is probably the least politically correct name for a pub that I’ve ever frequented. Shaking off my confusion, we stepped inside where the room swirled with the nostalgic aroma of aged wood and fresh beer. We sipped down a pint at a picnic table lined with cushioned seats and listened to locals chatting away with the bartender. Only a few folks were there on that weekday afternoon, quiet enough to hear the creaking of floorboards and the clanking of mugs over the chatter. 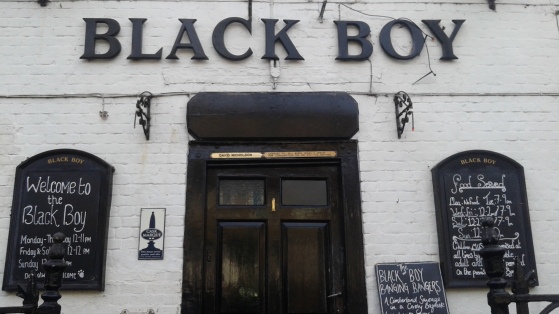 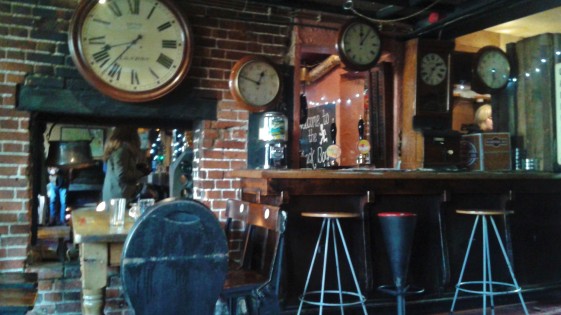 After satisfying our midday thirst, we strolled along a little stream that sparkled from the sunshine and was lined with pretty homes. Lunch would be some fantastic fish and chips at The Bishop on the Bridge and more pints (judge away), while overlooking the water. I have finally gotten used to the procedure of ordering food at the bar and seating myself that is commonplace in England pubs—there’s something relaxing about the lack of formality. The pub smelled like firewood at Christmas time. 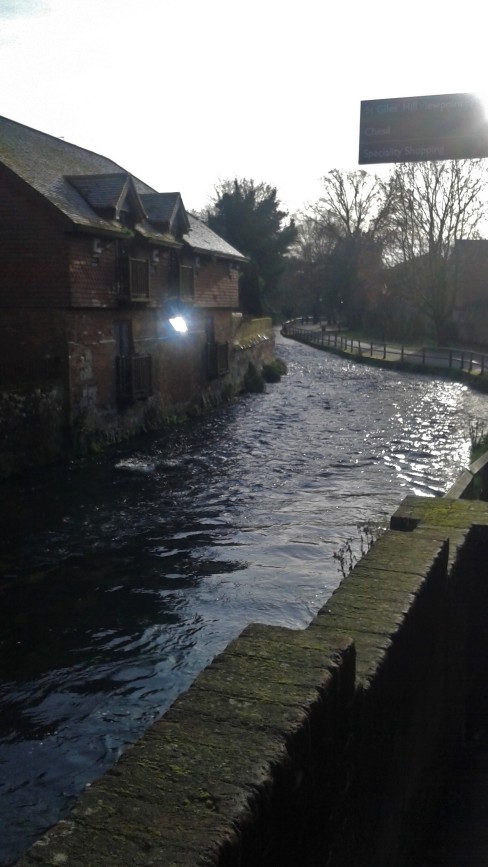 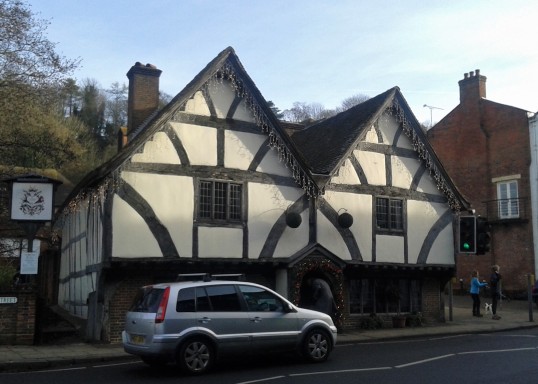 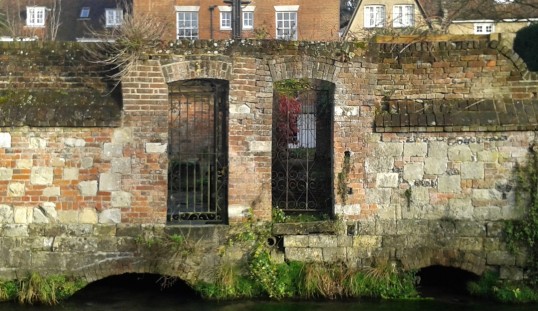 We took a detour to see Katie’s uncle’s old house on a quiet street on the end of town, peering inside quickly to avoid attracting the attention of neighbors. Afterward, we were feeling wiped out and caught a train just before 5pm, taking a long nap as we rolled back into the bustle of London. The sun set as the train sped home past green and sand colored hills and peachy skies. Everybody was quiet and spoke softly—symbolic of the lack of abrasiveness of locals in general. It brings you down a notch.

It was our final night away, so Katie and I rested briefly and had a casual dinner at Old Fountain back in Shoreditch, where we secured the very last portion of juicy Gammon steak topped with a duck egg. My first Gammon steak experience—it resembled ham in texture but had a smokey, char-grilled flavor and a crispy edge. We sank into our bar seats as the bustle continued around us, pretending that tomorrow was distant and avoiding the reality of going back to America ahead of the political events to come. 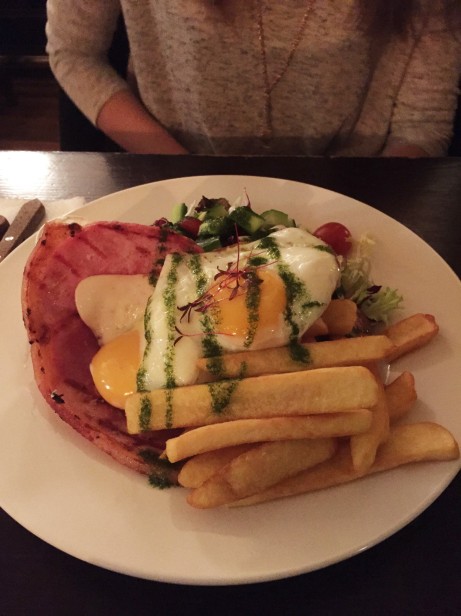 At the time of posting this, much chaos has occurred back home. I don’t intend to ignore that in my writing. But despite the (late) timing of posting the final piece of this venture, I’ll insist that everybody hold onto the concept of peace for a few more minutes. Even when reality swirls with confusion and pain, we can still sink into our bar stools with a pile of hot food in front of us, a cold beer in our hand, and a friendly conversation with a stranger. We’re still human. We’re still young (or young at heart). And we can still work to change the world while taking care of our very simple need for normalcy as often as possible. Like the flickering candle in the corner table at this pub–one gust of air from extinction–we hold on.

One thought on “London Bound—Clarity in Winchester”