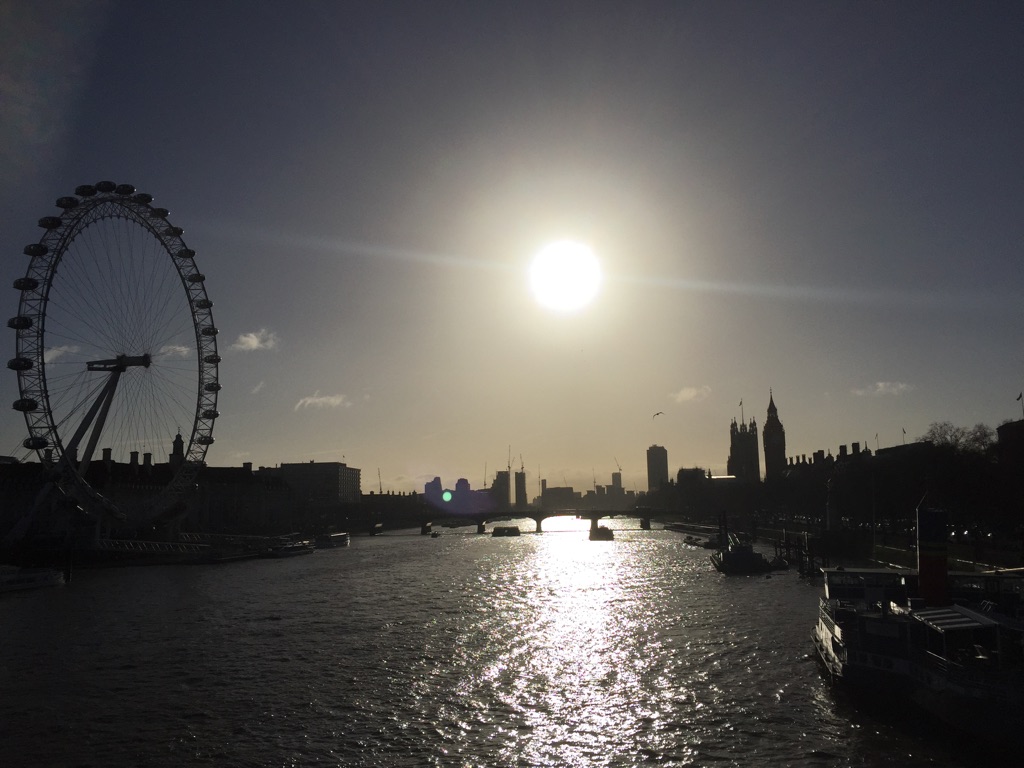 The day after New Year’s Eve was a bit of a “throw-away”. You can’t stay out until 6am when you’re 29-years-old and expect productivity when you wake up. We did little more than shuffle out of bed (late) in the afternoon and emerge into the land of the living only in time for an early dinner. We met my family and walked through London’s downtown Christmas lights amid misty rain before grabbing some dinner in the Covent Garden area (the restaurant name is as foggy to me as the night sky), vowing that tomorrow would be productive. 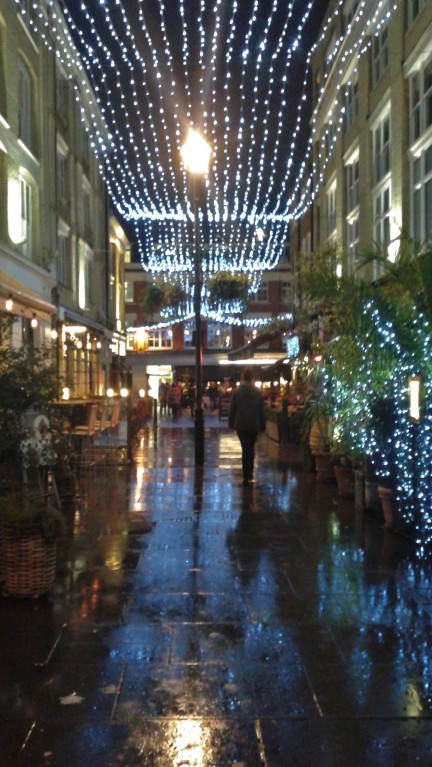 Everybody is allotted one day to “be a tourist” on any given trip. Since most of my endeavors involve moving to a new place a day or two after arrival, I normally spend my visits seeking out hidden gems and local secrets and avoiding “tourism” at all costs. I’ve never been a fan of the hype. But we were in London for a full 5 days and I decided to bend my rules a bit and do an abbreviated walking tour of some of London’s highlights the next day. There is something to be said about seeing the things that a city is known for, even if locals are reluctant to do so (as I am at home). 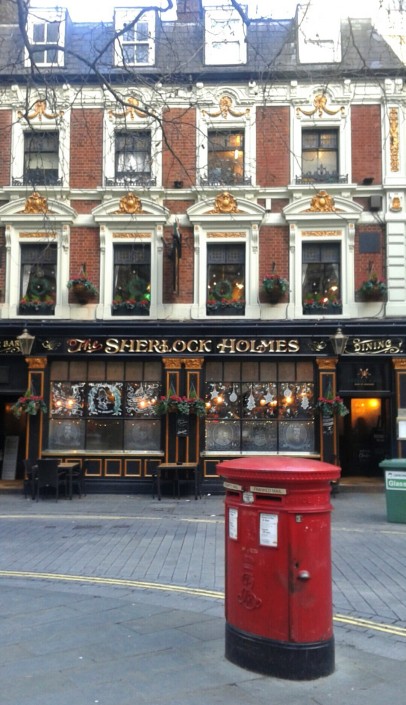 We started off towards Southwark in search of a full English breakfast. We learned quickly that England takes national holiday closings more seriously than America—it was nearly impossible to find an open spot for breakfast the Monday after New Year’s weekend. We settled on The Breakfast Club, a trendy chain restaurant with a queue (line) down the block, well known for hearty plates. Katie dug into her fried eggs, bacon, sausage, black pudding, home fries, mushrooms, Heinz beans, and grilled tomato with a look of sheer bliss. 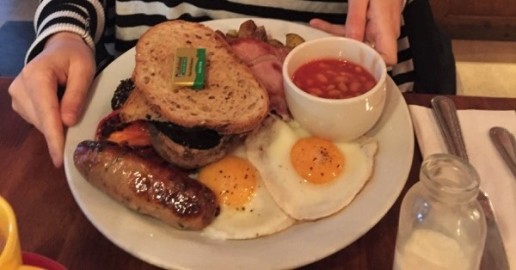 After our insides were coated in grease, we wandered along the waterside for an exterior look at Big Ben, before crossing the Golden Jubilee Bridge towards the London Eye. The sun was sparkling in rare England glory, shimmering over the water as we crossed back over the bridge once more, and hopped in the Tube towards the Tower of London. Feeling tourism-fatigued already, we viewed everything from the outside rather than paying the admission fees. 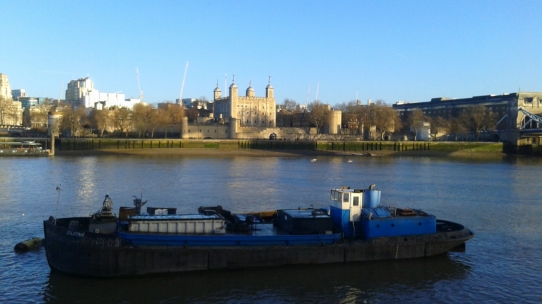 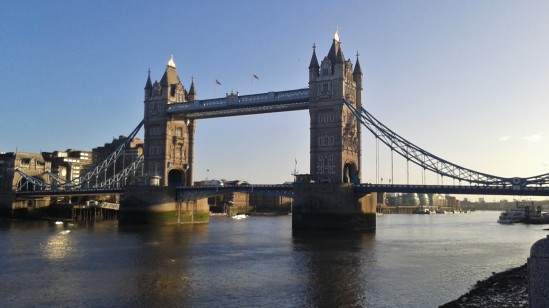 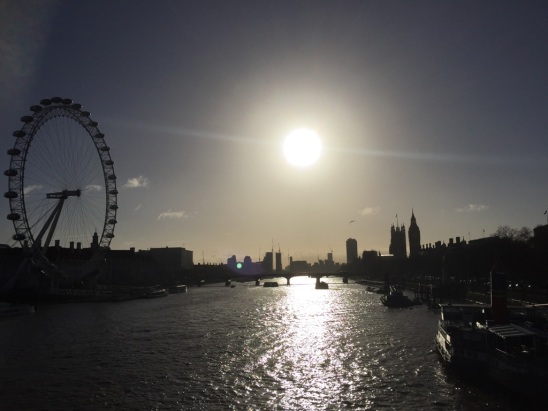 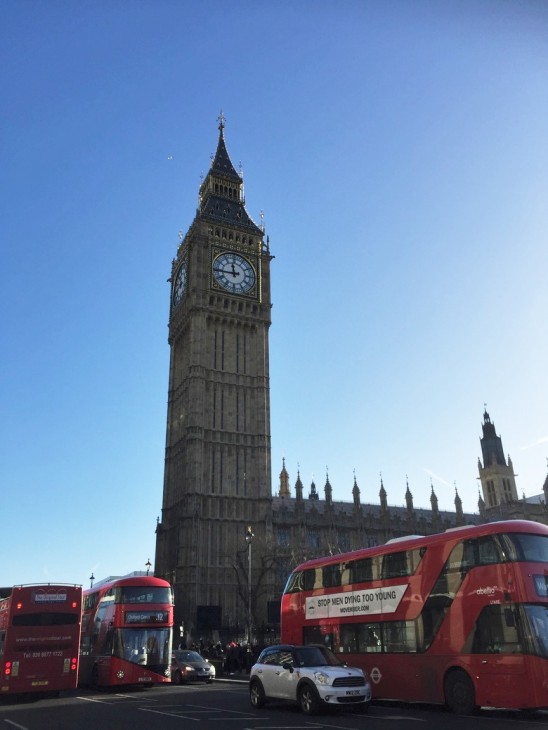 Our final stop was a stroll down Shad Thames, a short pedestrian-only street hidden between rows of buildings that coil around corners and connect together with suspended walkways. The architecture across the city is unique and detailed, standing in contrast to newer structures and patches of green. The city has held onto most of its older-era buildings in a way that NYC seems to be losing back home. It made the city feel like a shiny, preserved antique.

That night, we set off to meet Katie’s cousins at a restaurant in Shoreditch called Homeslice. The meeting was unique—in a surreal and movie-like story, Katie’s mother, who is adopted, recently found her entire birth family residing in New Zealand. Two of Katie’s newly discovered younger cousins now live in London, and the meeting that night would be the first ever meeting between them all. We sat down to order a few crispy pizzas and pints with a hint of uncertainty, but soon relaxed into a surprisingly effortless evening of stories surrounding the unique circumstances that led to that meeting.

After dinner, we all grabbed a cocktail at a hidden speakeasy down a dark and quiet outdoor stairway called “Happiness Forgets”, which was so inconspicuous that we walked passed it twice before locating it. After sipping away inside the low-lit basement bar with tiny cocktail tables, made one last stop to meet a friend from Brussels who happened to be in London on the same evening—“travel” friends (those met initially while traveling) always have a way of coming back into your life when you least expect it.