The next morning, we bid goodbye to our awesome apartment and set off to tackle (part of) the Golden Circle—a series of intriguing natural sights like craters and geysers—and end in our Airbnb for the night just south of Hvolsvollur. We grabbed some Skyr yogurts for the road (Islandic creamy yogurt similar to Greek yogurt) and went off towards our first stop, the Geothermal Park in Hveragerdi, which isn’t technically part of the circle. After getting mildly lost on country roads behind the town and parking awkwardly next to somebody’s house, we found the park and wandered around the perimeter like confused children. It looked like there was nothing to see except a few small steam shoots and several stray cats wandering by the fence. After debating the subject like it was the most crucial decision of our lives, we decided to skip it and move on.

The road began to emerge very soon after. The convoluted city streets were far behind us, and the wide open road ahead. Wild horses and herds of sheep roamed freely over the sweeping hills and grassy fields. At one point, our friends and we both stopped our cars simultaneously on the side of the road to get out and pet some exceptionally friendly horses poking their heads over a tiny fence.

Beyond this, we made our way to stop #2, Kerid Crater. We hiked along gravel paths around the perimeter and gazed into the wide expanse of the crater and teal-colored water below. After slipping and falling about 5 times between our group of 4 on the excessively loose stones on the pathway (Katie tore a hole in her leggings and accidentally flung the Go-Pro down a hill—it survived) we chose to forgo taking the questionable-looking steps down to the crater floor.

Getting hungry, we stopped for lunch at a place Lily had found while perusing interesting stops in the area. Fridheimer Farm sat unassuming down a gravel road, and would never have been found if we didn’t know it was there. This fully functioning tomato farm offers a buffet tomato soup and fresh bread lunch–with several additional options–in a light-filled, tarp-encased section of the farm with rows of tomato plants and beehives alongside it. You could smell the tomatoes on the vine the second you walked inside. It was crisp and clean, like eating on a country hillside. It was probably the most unique place I’ve ever eaten. The soup, self-served from hot, steaming black kettles, was absolutely fantastic. It was sweet, light, and absurdly flavorful. Trays of hot, fresh baked bread with crispy cheese crust were served alongside, and tables got their own plate of julienned pickled cucumber and sour cream for the soup. We learned from our server that because tomatoes are 90% water, the super-fresh glacier water that runs through Iceland provides a perfect setting for farming delicious tomatoes. 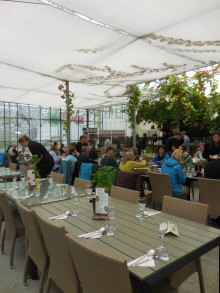 Full and content, we moved onto Geysir, which left any ill-will about our geothermal park snafu behind us. Milky-blue hot springs trickled sulfur-scented water throughout the park floor, and the geyser shot dozens of feet into the air every 3-6 minutes as crowds of onlookers braved the misty spray to snap photos. 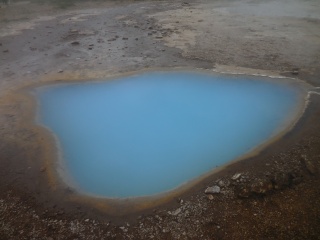 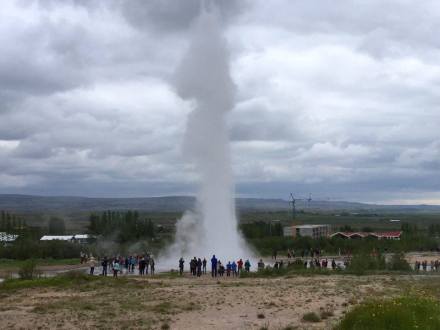 The day had begun to feel long by now, but there were so many things we didn’t want to miss. Every stop felt completely different than the one before. Down the road, we rolled into Gullfoss (“foss” at the end of a word seems to always coordinate with waterfalls) and trekked alongside rocky pathways to view an epically large waterfall that cut through a gaping canyon. On an ultimate high after leaving the falls, we stopped dead in our tracks in the parking lot after seeing our rental car—with huge dent in the back right corner. Of all the cars in the hundred-car lot, somebody hit ours and drove away. My heart dropped. After a few expensive and frantic international calls to Hertz-rent-a-car, we were told that a police report wouldn’t help (what is 911 in Iceland anyway?) and that we would only be liable for damages up to the Collision Damage Waiver deductible (the details of which I won’t divulge for my own sanity). We took a breath, and decided that we could either allow it to ruin our trip, or we could accept it as a situation we couldn’t help. 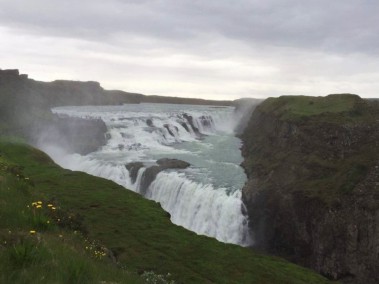 Instead of dwelling (or crying…much), we drove onwards to the Secret Lagoon in Fludir and drowned our sorrows away in steaming hot water with a rural mountain backdrop. Sometimes your problems are more easily melted away than you would expect.

At this point, it was much later than we had expected. By 9:30pm, we grabbed a quick gas station mini-mart dinner and went to find our Airbnb, a rural family farmhouse down a rocky gravel road. After driving a mile or two down the road and getting anxious about whether there was even a house on it, we rolled up to a small, quiet home and adjoining farm. Hesitant about the desolate setting of our accommodations, we slowly emerged from our car, greeted by a large and shaggy black dog. To our relief, the home’s caretaker came out to greet us in cheery glory, reassuring us that this was in fact that correct spot. Inside, we felt instantly at home in our little room inside the quiet family home. We ate like lightning and crashed like logs—the sounds of chirping birds and a light breeze in the fields singing us to sleep like a lullaby. 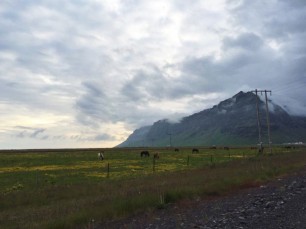 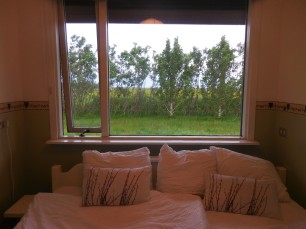 3 thoughts on “Exploring Iceland—South to Hvolsvollur”