The first thing I noticed the next morning was the wind. When we had done our big road trip a few years back, I remembered the fierce nature of those high planes winds in South Dakota, especially by the Badlands. North Dakota bore a striking similarity, and our car teetered back and forth along the highway and the wind whistled through farm houses and patches of grass. I felt nostalgic today, being so close to our “original” road trip route. I saw highway signs for Sioux Falls, SD and it quickly brought me back—a little bit like coming home. We took Route 10 on the return trip instead of the larger Highway 94, because we wanted a different experience this time around. I tried to take us to a ghost town called Dale, MN, but when we turned off the highway in the middle of nowhere, we realized that the road was unpaved and there was a questionable-looking man sitting in a semi-truck in the grass—like a creepy dirt road gatekeeper. We stopped the car and I stared longingly down that “horror movie” setup of a road and just as we were about to make a go at it, the man in the truck opened his door and turned and looked right at us. In a frenzy, we made an awkward U-Turn and sped off back down the highway. Ghost town hunting is an imperfect science.

We looked on our Atlas and saw a green shaded area on the map called Smokey Hills State Forest, and we detoured in order to drive through, hoping it would be scenic. The best part about detouring is that there is always a “Main Street” to plug into your GPS in whatever random town you are headed towards. Americana at its best. Before leaving the main highway, we made a pit-stop to get some Nashville hot chicken from KFC and the absolute worst road coffee I’ve ever had (which speaks volumes). Life lesson—KFC is not the place to order caffeinated beverages. The cashier had to dig powdered creamer packets out for us from the spare closet. 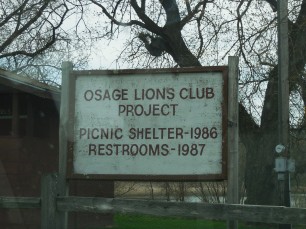 We ate lunch lightning fast at a shady, quiet roadside picnic spot that had me so paranoid I had to finish my chicken while I drove away in a tizzy. That’s how horror movies start. Finally back in Minneapolis, we parked by our Millennium Hotel (booked for cheap on Hotwire.com) and went off to explore downtown. We were strangely un-hungry after our fried chicken and Sour Punch Straws road snacks, so we ate light at Zelo and then wandered into a bar on Broadway (street with bustling nightlife) for a drink, drawn inside by their “purple drink” special to honor the recent death of Prince in his home city. Not 5 minutes after we sat down did we witness a man casually waltz inside, reach across the bar, and sucker-punch the bartender for seemingly no reason. Like lightning, four bouncers wrestled him to the ground, kicking and flailing, until the police arrived. Never chugged a vodka tonic down faster in my life.

Shaking off that initial first impression, we went down the street to explore a bar we had read about called “Gay 90’s”, because there’s literally no good reason to not go someplace like that. The first floor was moderately quiet, but upstairs was an explosion of Las Vegas-meets-drag-queens-meets-rainbow confetti. There was a theater-sized drag queen show that ran all night long, multiple bars, a photo booth, and about 18 screaming bachelorette parties. They played a mix of 90’s and modern pop to a full room of show-watchers, bopping and sloshing their mixed drinks onto the psychedelic-colored carpeting. I’ve never quite experienced any place like it. We planned to only stay for a drink or two, but teetered out closer to 1am in search of a country bar called Lee’s Liquor Lounge.

By this point, Broadway started to resemble something similar to a shadier version of Times Square in NYC, and the glow of neon lights from kitschy bars and questionable characters became more in focus. Happily hopping into the Uber, we got to Lee’s (a much more local choice) too late to see the live music, so we slurped down one last Bud Light before crashing for the evening.