This next trip is an especially important one. Katie turns 30 on April 26, and she has 3 more states to cover to complete her 50 by 30 Challenge. On this trip, we will hit Minnesota, North Dakota, and finish with the crowning glory—Alaska. I will bring my total up to 44 states by the time we’re done, but I have another year and a half to complete the job. I’ll probably be ending in a cornfield in Kansas.

Our first stop would be Minneapolis early in the a.m., where we would drive straight on to Fargo, ND for the night, and then back to Minneapolis for another night before jetting off to snow country. We landed on Friday and picked up our rental car in record time, with zero line at Dollar Rent-a-Car for the first time ever. That’s probably because most people don’t vacation to Minnesota on a Friday morning in mid-April. We had the giant paper Atlas in the front seat and were on the open road. The very first observation I made while in Minnesota was how green the grass was. It was scary green. Almost neon. They say the grass is always greener on the other side? No, but it is definitely greener in Minnesota…

About halfway between Minneapolis and Fargo we started to get hungry, so we pulled into a little town called Sauk City with an old-fashioned Main Street and got coffee and an egg and cheese soft taco at Jitters Java Cafe. I experienced my first hardcore Minnesota accent, and it caught me a little off guard. I love traveling for the vast differences in dialect within just a few hundred miles, but I need to work on my poker face.

Further down the road, when we needed to stretch our legs, we pulled into a gas station tucked into a vast expanse of rural road. Sitting next to the station was a giant statue of a Bison and a wooden Teepee, so obviously, we took a few ridiculous photos with Katie’s iPhone timer before jumping back into our car to avoid the inevitable judgment of truckers filling up their gas tanks next door. After deviating from GPS directions in an attempt to cross the state line into ND on a smaller road (with an accessible state sign), we unintentionally drove through the one small town with no such sign. C’est la vie. 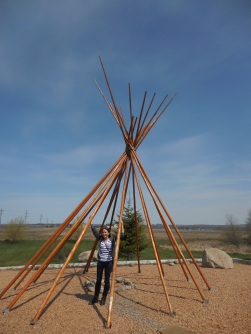 When we rolled into Fargo soon after, we immediately went to the visitor’s center because Katie had read that they had the “Welcome to North Dakota” sign we wanted to take a picture in front of. When we got there, an older man was standing by the sign as well and asked if we could take a picture of him. We went to take the picture and he held up a “50 by 60” sign, and after our sudden and surprised reaction, we struck up a conversation. We learned that he was completing his 50 states by age 60 (on a motorcycle) the same way we were completing our 50 by age 30. Apparently, there is a club of people who make North Dakota their 50th state, and you get a t-shirt and a sign on the wall. ND was Katie’s 49th state (and my 43rd), so we just missed it. The man’s name was Brian, and we gushed to one another about traveling and the irony of meeting another 50-stater before we bid each other good luck:

“Stay safe out there on the open road!”

There’s something really special about the way that you connect to fellow travelers on the road, despite a jarring age difference. It’s a highly instinctive and instant understanding you have of one another—a mobile community that feels so very much at home. It’s almost too easy for me to live on the road.

Once we had settled into our motel, we grabbed a pint of local beer at Wurst Beer Hall and then went to Spitfire Grill for a kick-ass dinner of smoky BBQ ribs and garlic mashed potatoes. My hair and clothes still smelled like a BBQ pit from that place the next morning, but it was forgiven by the memory of those ribs. Thank you, North Dakota.