A few weeks ago, Katie and I made a last minute decision to escape from the city for a weekend. These spontaneous ideas are not uncommon for us, and we’ve become somewhat talented at spur-of-the-moment planning. We realized she was going to have a weekend off of work that we previously thought she would be working, so we decided to spend that entire weekend drinking wine…in the Fingerlakes. It’s classy when you spent a whole weekend drinking, as long as you do it on a wine tour. You didn’t know that? It’s fairly common 20-something knowledge/logic. It’s probably in a guidebook somewhere.

Last year we spent a weekend in Montour Falls, about 4.5 hours from the city, and we used a tour company called “Experience! Fingerlakes”, but because we did our trip at the very end of November (late season), our tour options were limited. This time, we were lucky enough to get spots on the “Vine and Dine on Seneca Lake” tour with the same company, which is essentially 7 hours of drinking wine and eating delicious food while being driven around gorgeous Seneca Lake. It’d hard to think of a better way to exist on a Saturday. We got a room in the little town of Watkins Glen due to a last minute cancellation at a local B&B. Seeing as this was the only available room at any of the eight B&Bs that I contacted, it was a pretty lucky find. We booked the wine tour before finding an room, so we took the risk of sleeping in our car like lost children in the name of vino. 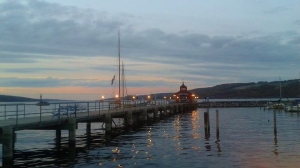 The morning of the tour, we woke up to a frighteningly adorable B&B breakfast at Seneca Lake Watch where we were staying. There’s something so awesome about staying in a homey, local spot like that when you visit a really small town. It sat on a quiet street surrounded by forests, and the air smelled fresh and cool. We made fast friends with the group of other couples staying in the house, and dug into our “3 course” breakfast including fresh berries soaked in cream, warm banana bread, eggs, and never-ending coffee. One of the B&B owners, George, was chatty and super sweet, relaxing with us in the breakfast room like he was having family over for a meal.

We strolled into town and were picked up by the tour company, piling into the mini-bus and exchanging names with the 10 or so other people aboard. The tour would take us to four wineries, with cheese, chocolate and small bite pairings at all stops and a full lunch at the second winery. The lake was intensely blue and glistened as we wound over hills and down a long dirt road to the first winery, where were greeted with a glass of prosecco and:

“I hope you wore comfortable shoes”

We were led out into the vineyard and allowed to taste fresh grapes right off the vine, and received a quick lesson on vineyard upkeep as our feet sank into the fresh dirt. Inside, we paired generous pours of wine with local cheese and crunchy toasted pumpkin seeds, which were tasty enough that I decided to buy a bag to go along with several bottles of wine. We tasted light and airy Pinot Noir, and learned that most people picture Pinot Noir the way that it’s made in California, which produces a fuller-bodied, heavier tasting glass. Apparently, Pinot Noir grapes naturally produce the lighter-bodied, cleaner red wine that is seen in the Fingerlakes. This means that, basically, it does matter where the wine you drink is made in regards to your personal taste. I tend to prefer the intensity of the California type, but it was kind of neat to taste it in a different form. I bought a bottle…is what I am saying 🙂 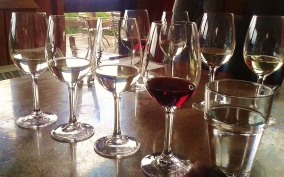 Stop number two, Red Newt Bistro & Winery, is where we were going to get our full lunch. Since it had been several hours since our extra-early B&B breakfast, I was starving. Also, because I am Sara, I am hungry more often than an infant child. We sat in a light-filled room at a long wooden table, and lunch was an amazing tasting plate with samples of different food. This included: spicy tomato cream soup in a shot-glass sized pour, a mini sharp cheddar grilled cheese surrounded by crisp, buttery grilled bread, cheeses and caricatures with whole grain mustard, black bean cakes, and fresh kale salad with sunflower seeds, fresh Parmesan and honey dressing. Honestly, there wasn’t one single bite on that plate that I didn’t love. Every piece complimented one of the wines in some way or another, and I literally scraped my plate clean (and sipped my glasses clean, duh). At this point, two of the girls on the tour decided to buy an extra, full glass of wine before we moved onto stop three, which proved to be an interesting choice considering the large quantity of wine that we had consumed thus far. When in Rome.

Stops two and three brought many more sips of wine and clanking of glasses. At the final winery, we did a chocolate and wine pairing with teeny, bite-sized pieces of homemade chocolate that included tangy raspberry, creamy espresso and several other varieties. At this point, our brains were buzzing from the whirlwind of fermented grapes and we were feeling pretty good. We joined our new friends in buying an extra glass of sparkling wine (the same girls who had been ordering extra glasses for several wineries) and sipped on our wooden bar stools until we were whisked away by our tour guide. We snapped some photos in front of an old tractor with a sunset backdrop before pouring ourselves back onto the bus for home. We only got 8 bottles total (and one bag of pumpkin seeds and 2 boxes of chocolate) throughout the day, which displayed a great deal of self control in my opinion (one couple bought 2 cases). Our wine cabinet was getting sad and needed new friends. 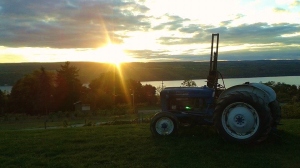 The tour was pretty much perfect, and well worth the cost for the amount of food and wine we got. I’d use that company again in a heartbeat. Back at our B&B, we couldn’t even blink before cracking open our first bottle and sipping a little bit before heading into town for dinner. We made friends with another 20-something couple who came in from Canada, and found each other at the restaurant despite their lack of working phones. Munching through a butternut squash pizza that evening, I decided that maybe that pre-dinner glass of bubbly was not 100% necessary after our boozy day, but I felt inspired by the serenity of my small-town escape. Sometimes, “good” choices are not always the best choices. Happy wine-y weekend 🙂