We checked out early and left little Panguitch after spending a few minutes blow-drying our sneakers from our river-walking the day before. We headed for Bryce Canyon, where we took the main scenic drive through the park and stopped at various overlooks. The park reminded me a lot of the Grand Canyon but, dare I say, I actually liked it more than the Grand Canyon. The canyons were layered with interesting rock formations that changed at every turn and jutted out in different directions. We tried to take a horse ride down to the canyon floor, but since they were booked out, we chose a 2-mile hike to the bottom instead. I liked the availability of short hikes to the floor, versus the Grand Canyon where you had to commit to a daylong venture in order to make it there (this, as you can guess, didn’t happen when we visited. Variety is my friend). 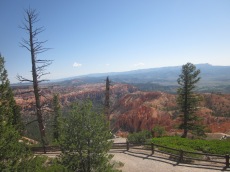 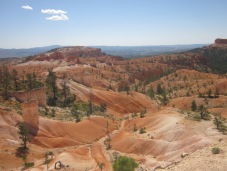 The hike took us on a skinny path that wound around canyon walls and ridgy structures, allowing you to hug the edge and climb over rocks. It was kind of captivating, and the scenery kept changing as we got closer to the ground, from staring out over the canyon to being nestled just inside of it. It was more than worth the walk. Knowing the climb back up would be exponentially harder than the climb down, we only paused briefly at the culmination of the hike (the “Queen’s Garden”, named for a rock that resembled Queen Victoria of England…), fed some unusually friendly chipmunks alongside fellow hikers, and made the trek back to the top.

Leaving the park, I somehow managed to convince Katie to go on a mini-adventure down a small rural road called route 63 (turns into 22) towards a tiny town called Antimony (population: 122). I had found a ghost town called Widtsoe Junction online, but (as is common with ghost towns) no specific directions existed. The best I could find was that it was about 22 miles south of Antimony on the only road on the map that was paved. Katie was hesitant at my lack of confidence about our route, but we made the turn down the less-than-optimally maintained “highway” that went on for about 35 miles.

“It has to be down this road, unless it’s on a road that isn’t on the map…”

Once we got 23 or 24 miles south of Antimony, I saw a little sign that said “Widtsoe” and an arrow pointing right down a gravel road. We just missed it, and made a quick u-turn down the empty highway and reluctantly turned down the gravel stretch of land that had a rusted, abandoned cattle truck parked at the entrance like a symbol of abandonment. Katie was more than freaked out by now and I began to doubt my findings when we noticed two trailers in the distance, one regular car, and several abandoned houses that I assumed were part of the ghost town. We chugged down the unpaved road at about 5mph, worried about the durability of our 2-wheel drive car that’s used to highway miles. My heart began pounding as we neared the first abandoned house because we were close enough to see people walking around the trailers, and they didn’t look like they were ghost-hunting. At this point, a pickup truck rolled down the road out of nowhere, puffing a huge cloud of orange dust behind it, and passed us heading towards the highway. Obviously, there was more to this “town” that was out of eyesight and around the side of an ominous hill, but we didn’t want to stick around to see what it was… 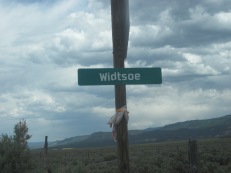 We turned around messily and chugged back towards the main road as quickly as we could, more nervous now and ready to get out of there. We left Widtsoe behind in the dust and happily continued until our “route” met back up with a more populated expanse of land. By “populated”, I mean that we had to stop several times to allow cows to cross the road. I guess we’ve gotten used to weird by now.

Salt Lake City bound and thinking that a city stop would probably seem like a culture shock after our seemingly endless country meanderings.