The next day we made our way to Zion National Park, which the ranger at the Rocky Mountains said reminded him a lot of Jurassic Park. We decided to make a quick stop at a Walmart to try to pick up some cheap tank tops, as we didn’t pack properly for the desert heat we were encountering. Being inside a Utah Walmart was like being a kid in an ice cream shop. I WANTED EVERYTHING. I wandered through the aisles of dirt-cheap shopping glory and left with hike-appropriate Danskin sneakers ($14.99), three new tank tops ($3-$5 each) and a new bottle of sunscreen. Super successful detour. On our way towards the park, we drove through a little town called Virgin, Utah with a population of about 596. Upon a quick googling (I do this a lot when we pass through tiny towns and villages) I discovered that Virgin has a mandatory gun ownership law, which states that every household must own and maintain a firearm with the exception of the mentally ill, felons and conscientious objectors. This made the prospect of breaking down or making a stop just a tad less comforting, and reminded me how wildly different ways of life are in different parts of the country. I have also noticed the lack of bars/saloons in small Utah towns versus small towns in other states, which is likely due to the prevalence of Mormonism and strict liquor laws.

Properly outfitted (changed discretely in the car) and ready for actual walking, we spent 5000 years finding a parking spot inside Zion after learning that we weren’t allowed to drive ourselves through the park and must use the free shuttle instead (this is to cut down on traffic for visitors). This ended up being nice as we left our things in the car and only took cameras and a little cash to go about our day. We took several short hikes to pretty sparkling waterfalls and rode the shuttle up further into the park towards our last hike, a 2-mile round trip walk along the river that we took because we thought that it ended in a narrow rocky area (the “narrows”) but we quickly learned that the area didn’t become narrow until several miles further than we were willing to trek. At the beginning of the hike, the hot air and my lack of endurance started to take its toll, and I stated passionately that I would not be able to make the 2-miles in full. Katie humored me with agreement, but once the adrenaline kicked in, I got a second wind and breezed through the hike until we got to a point where we had to cross straight through the river (sneakers and all) and where tired hikers were leaping into the cool, perfect water in full clothing. We looked at each other and then plowed into the stream knee deep, wading through and splashing relief onto our sunburn shoulders. All my exhaustion evaporated and I enjoyed the other-worldly scenery of steep cliffs with bright green trees towering over the winding stream. Are there dinosaurs?? Who knows…. 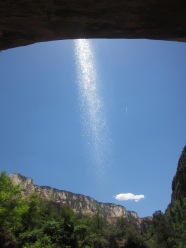 We grabbed a cheeseburger at the lodge (shared, as we didn’t bring enough cash), and satisfied with our 4 miles of total hiking in 90 degree weather (this is a huge accomplishment for us!!), we hopped the shuttle back to our car, sweaty and worn, but feeling pretty good. We took a scenic drive out of the park which brought us out closer to Bryce Canyon, which we planned to hit for dinner and actually peruse the next morning. We stayed at Lamplighter Lodge in Panguitch, Utah which boasted little attractiveness short of the fact that it was 30 minutes from Bryce Canyon and cheaper than the closer accommodations. Despite its decent reviews, we were more than a little creeped out when we showed up and realized there were no other cars there and the whole town felt run down and sleepy. We looked at each other with concern.

“The room is nonrefundable….”

So we checked in and made sure the deadbolt was solid (it was). The room wasn’t bad, and the bathroom was green and pink colored in a way that made it feel like visiting your grandmother’s house. We relaxed a bit and then drove towards Bryce Canyon to grab dinner at the restaurant in the main lodge as there were few options in Panguitch, and remembering how nice it was to eat inside the park when we visited Yellowstone during our first trip. The restaurant was quaint and calm, and we both got the buffalo strip steak with red wine demi-glace, which was pretty decent. The buffalo was slightly tougher than regular steak but boasted a heartier flavor. The sauce had that satisfying pang of reduced red wine which complimented the beefy flavor and provided a nice acidity. The meat was sliced thin which allowed for better absorption of the sauce.

After dinner, we realized we were just 2 minutes away from the Sunset Point inside the park, and even though we had just missed the sunset, we parked and walked to the viewing edge to catch a glimpse of the mystical canyon view at twilight, quiet and serene under the moonlight. 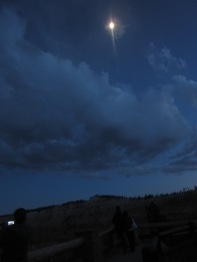