The next day, it was time to hit the road again. We bid goodbye to beautiful Llandudno on a sunny morning and before we knew it, we were back in the quiet countryside with little roads and lots of sheep. 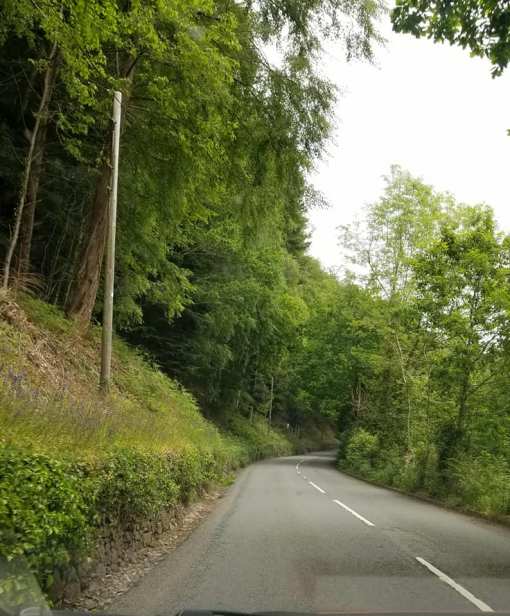 Before landing in Tremadog for the night (a “suburb” of the village of Portmadog, two names I butchered in pronunciation), we stopped in Llinbaris to take the Snowdon Mountain Railway up to the top of Snowdonia (in operation since 1896!). I recommend booking in advance since it gets popular and only runs a couple times per day. The old steam train puffed away from the station, showing its age by blowing a sulfur-like scent into the train cars when we happened to idle too long. 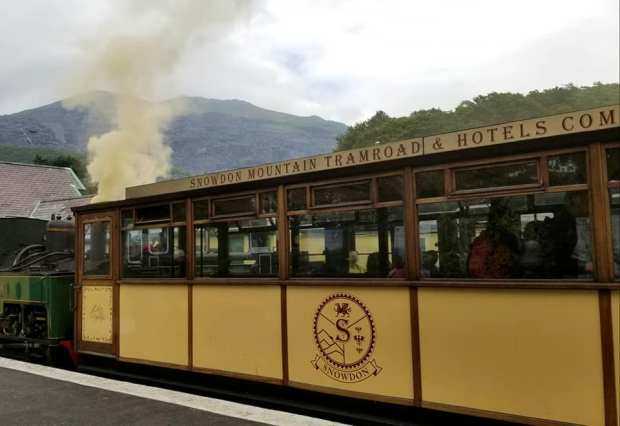 The one-and-a-half hour trip up felt much shorter–the view kept changing and the landscape was blanketed in a peaceful fog. More ambitious individuals chose to hike their way to the top while we sat lazily on our train car, waving at us ambitiously as we chugged past them. The steam train had to occasionally stop to “refuel” with water. 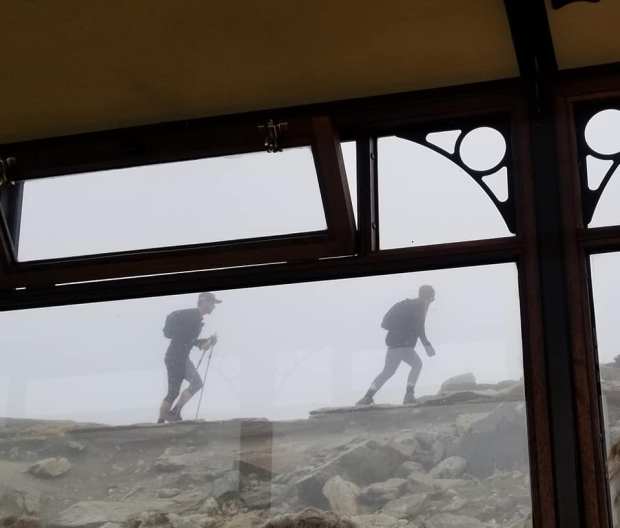 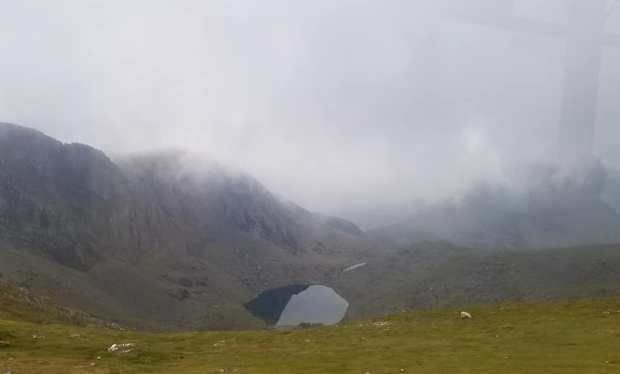 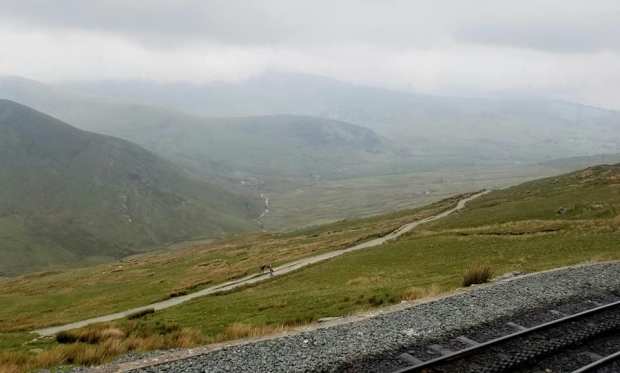 By the time we reached the summit of Snowdonia, the highest peak in Wales, we were completely enveloped by fog. What should have been a sweeping, panoramic view of the landscape was nothing more than a claustrophobic puff of cloud. What can you do–that’s UK weather for you. Our group laughed it off and snapped photos of each other as we seemed to sink into a vast cloud of mist. 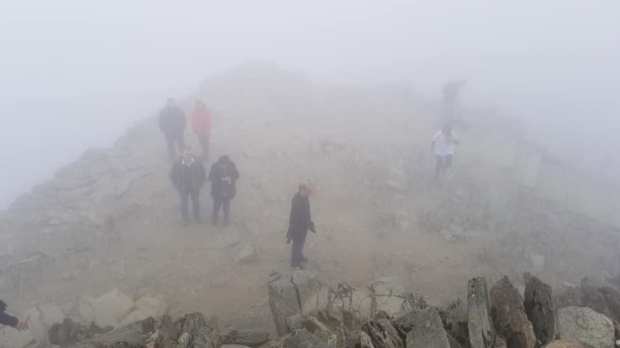 Back on the bottom, we continued our road trip with a stop in Llanrwst to have afternoon tea at an old vine-colored tea room that looked like something from a postcard. It had low wood-beamed ceilings, toasted sandwiches, and perfect scones—both soft and crunchy simultaneously and covered in sweet clotted cream.

Can you spot the tea room?

On our way out of town, we encountered a 1-way bridge that inclined into a blind hill, requiring us to back up in order to allow a car to pass that beat us to the “top”. To compound things, there were pedestrians running alongside the 4 inch road shoulders without a care in the world. Just another heart-pounding day on the road.

We rolled into Tremadog in the late afternoon. The entire village was squished into a few quiet streets, with 3 total options for hot food around a tiny town square. We picked dinner at the pub within our hotel, ordering espresso martinis from a confused older bartender who waved down her teenage co-worker to go make fresh espressos at the hotel’s coffee stand. In our defense, martinis WERE on the menu…

It was surprisingly noisy that night for a town with so few people. A handful of local teenagers had turned the town square into a weekend hangout, their voices echoing off the rows of homes and nearby hillside. After they had gone home, the space grew silent and serene.

The next day, we drove a mile into Portmadog and caught the Welsh Highland Railway train to Caernefron for the day (trains are becoming a travel trend). A poignant upgrade from previous trips, this train was complete with food and drink service and actual cushions on the seats. The landscape was stunning–it reminded me of Iceland with sweeping hills and thousands of sheep and lambs. Sometimes a rogue sheep would start running down the tracks ahead of our train, causing the conductor to pump the breaks and honk the horn. 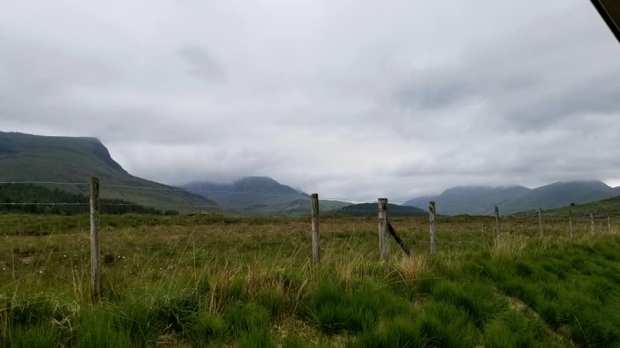 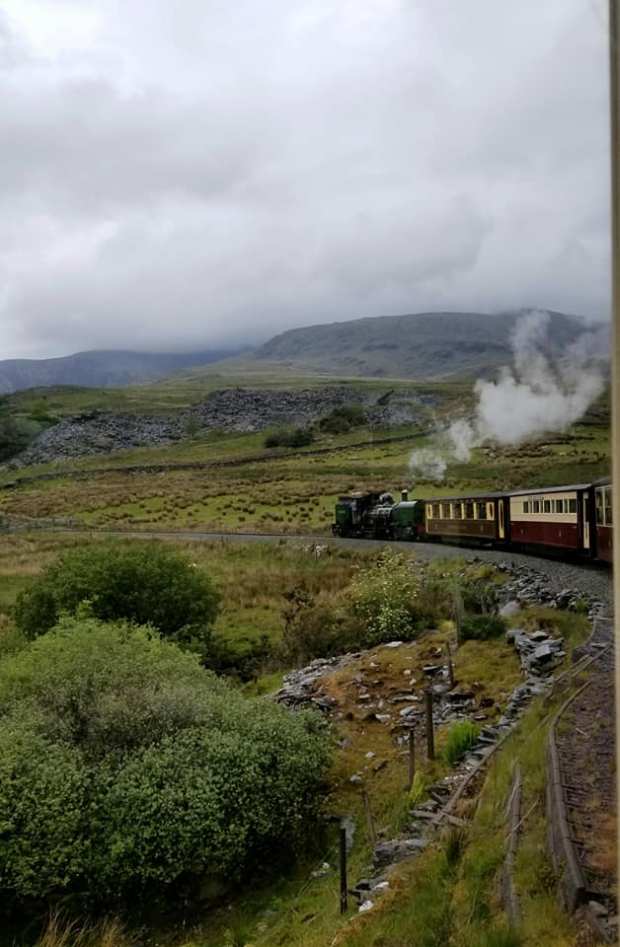 We only had 2 hours in Caernefron before the train made its way back to Portmadog. Katie and I chose to spend this time drinking beer next to a medieval castle. It felt sufficient. Back on the train, having acquired a snack from a teenage train waiter who looked like a young Paul McCartney, we settled in and enjoyed the countryside until we were back in our village.

Since we’d already eaten dinner at 1 of 3 options in town, there wasn’t much to choose from for our last night. We decided to go to Y Swgar based on amazing TripAdvisor reviews…Wow…It was possibly one of the best meals I’ve ever had. I got slow roasted lamb shoulder infused with mint and accompanied by sweet red cabbage slaw in a tangy sauce. The meat was buttery and the sauce was addictive. Katie’s roast duck with crispy skin and shallot plum sauce was just as perfect. We washed everything down with a copious amount of white wine and went to sleep already missing the food. 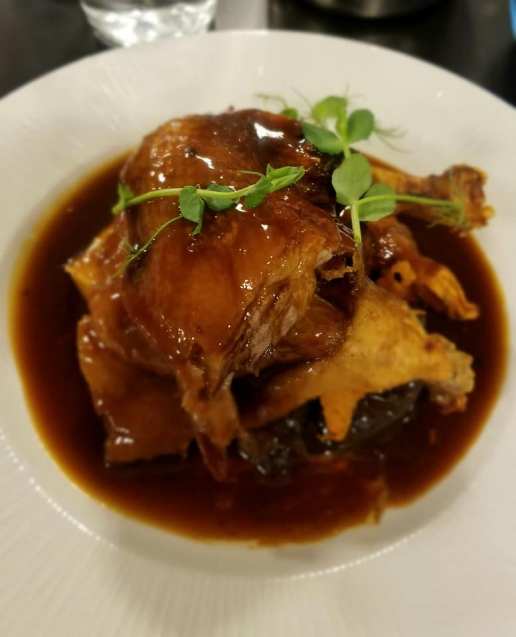 I was too enveloped in my own food to photograph it. This is Katie’s roast duck.

A faint church bell in the distance would sound on the hour starting at 4am, so you knew the time without checking your phone. It should have been irritating, but instead it felt grounding. The calm energy here made me feel calm as a person. I felt protected in that secret, tucked away town, far from the anxious and angry energy at home that seems to change the structure of the air. I’m just a different person in this energy. 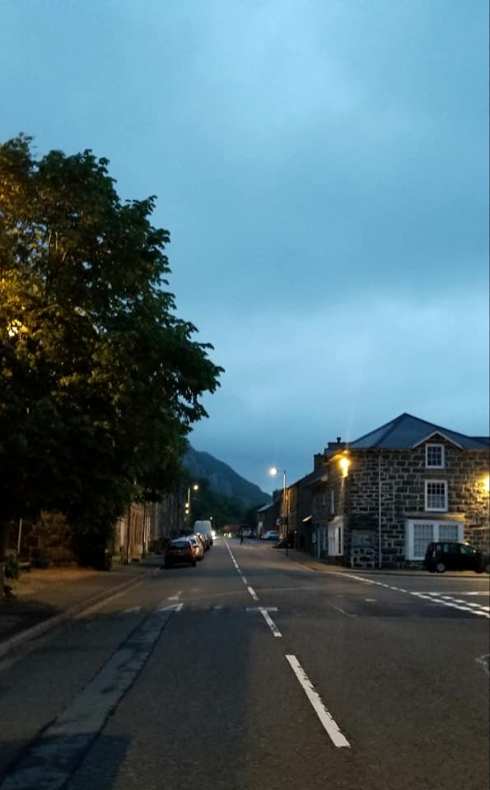