Cape Town and the Kruger National Park area might as well have been on different planets. We hopped a short flight to Hoedspruit, a rural town adjacent to the park that sits in a “malaria zone” (I recommend getting anti-malaria pills from your doc before you come). The size of the arrival airport is jarring when you consider the fact that the plane had 150 people on it. Passengers hop right out onto the tarmac and to the “terminal”, a one-story structure roughly the size of a small house. The parking lot is a dirt road and baggage claim consists of an airport attendant flinging bags onto the ground as passengers scramble to scoop them up. Our airport shuttle was an open-air safari vehicle that drove by a large baboon on the way out the door. 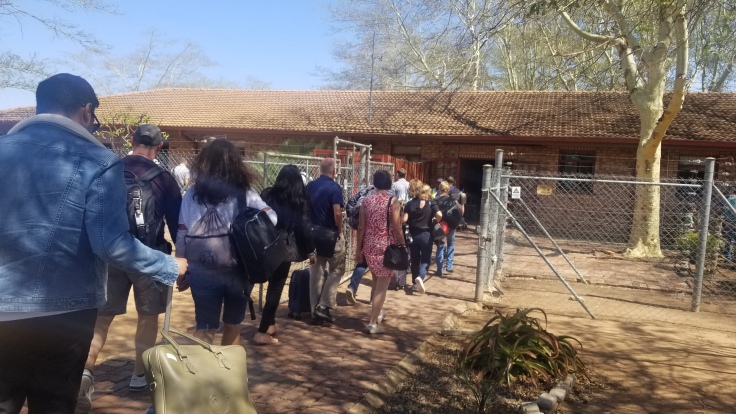 We stayed at one of the local resorts inside of a private game reserve, which serve the dual purpose of protecting endangered local animals. Everything in South Africa is frighteningly affordable except for lodging by Kruger. There are very few “middle of the road” options between camping and elegant manor houses, so we decided to splurge for just two nights. We had no idea what to expect, so when our shuttle arrived at the lodge and we were personally greeted by 6 staff members in a single file line who introduced themselves one-by-one, we nearly fell on the ground. We are definitely not that fancy.

Khaya Ndlovu Manor was beautiful–an infinity pool sat overlooking an open safari where animals gathered by a watering hole. The common living room and bar are open to the fresh air and host to a wandering grey cat.

Overnight accommodation includes a 4-course dinner from the in-house chef. Because the last room available when we booked happened to be the honeymoon suite, we were offered a special table right by the pool that night that overlooked the safari and crescent moon (we are engaged, so the shameless exploitation of attention isn’t a total lie?) The chef comes to each table and personally explains the menu, which changes each night. We got savory pea soup, a filo dough goat cheese and caramelized date tart, and a whole roasted trout with lemon caper butter. The fish had sprigs of thyme and lemon slices stuffed inside that were uncovered as you flaked it away. It was buttery and bursting with tanginess but also super delicate. I was gushing so much that I don’t even remember what dessert was.

When we got back to our room, we were shocked to see that our sheets had been turned down, our mosquito net opened, and chocolates and water bottles placed by our beds. We couldn’t help but burst into hysterical laughter because we are so NOT used to celebrity treatment. They even refolded the toilet paper end into a triangle. Seriously, whoa. “Squeaky” the cat followed us into our room and we had to shoo her out before crashing for the night.

We woke up bright and EARLY for a 5:30am pickup to Kruger National Park. Morning and night are the best times to see animals, so everything gets going soon after the sun rises. A staff member (caffeine angel) was there to give us a lightning fast cup of coffee before we set off. Us along with about 6 others crowded into the safari vehicle and set off towards the park with the wind whipping alongside us. The main premise of the tour was to hunt for the “Big 5” (elephants, leopards, lions, rinos and buffalos), but some of those are easier found than others. Leopards and lions tend to be the most elusive, but before we knew it there were families of elephants all around our car and wandering from one side of the road to the other. Everybody sat in silence as they moved around us. It was incredibly cool. 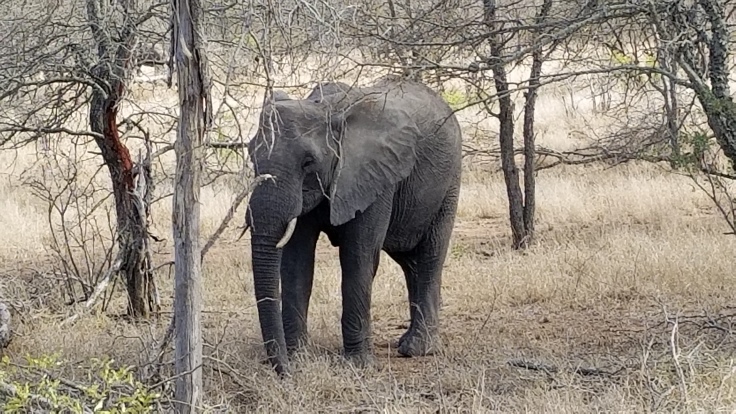 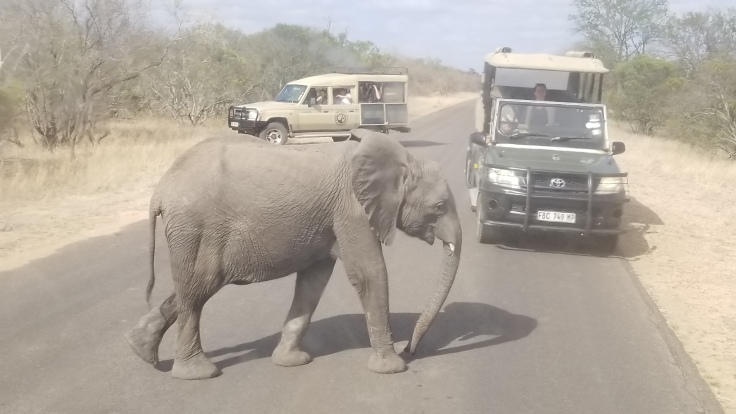 At one point, our guide saw a crocodile and mentioned offhand that it could signal an ongoing flood.

“They often know something that we don’t”

As the morning faded away, the air got drier and hotter. The sun snuck its way into the safari vehicle sideways, circumventing the overhead cover like a snake. We kicked toasty orange dust up onto the backs of our legs as we hopped out for lunch. The rest of the day was spent watching zebras chase baby baboons that jumped between trees. 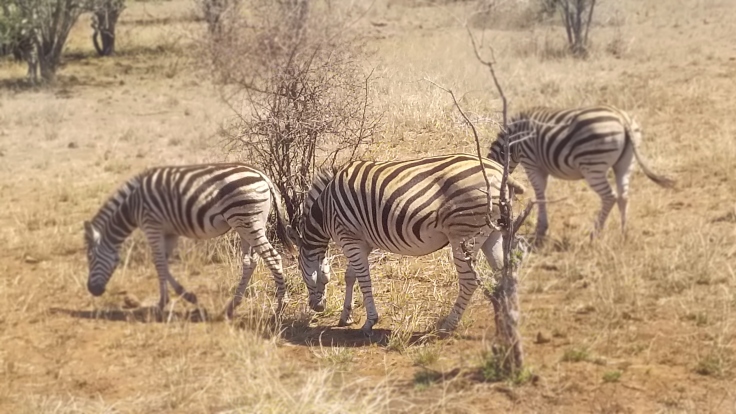 Our guide slowed down the car to coordinate with every passing vehicle in the hopes of finding one that had seen a lion. It was a full scale, exhausting hunt. Just before leaving, we finally found a lion couple sleeping under a tree in the distance. 4 or 5 cars pulled off the road and gathered to quietly watch them from afar. It was surreal. 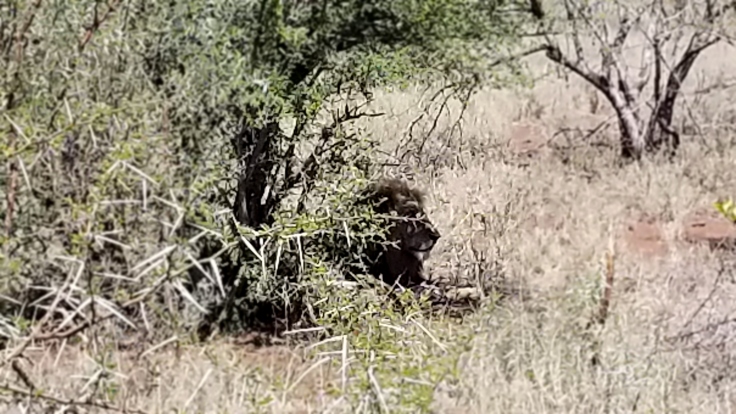 When we got back to the manor house, we were exhausted and immediately leapt into the icy cold pool. The surge of relief on my parched skin was heavenly. As the sun set over the trees in the distance, the sky turned shades of pink and purple. The orange glow of the sun soon dipped below the horizon and took the heat along with it, leaving a crisp and comfortable twilight. 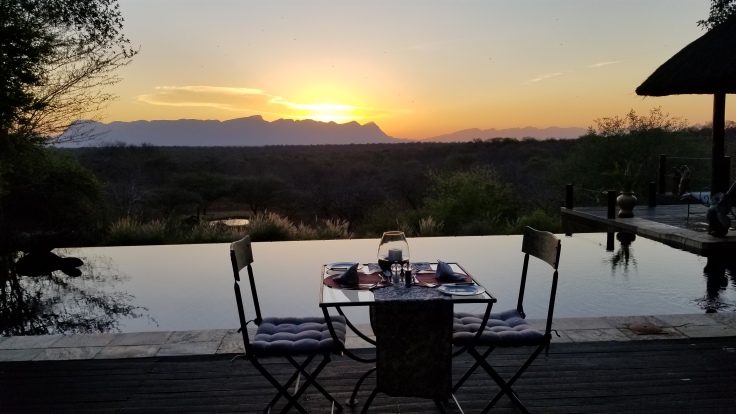 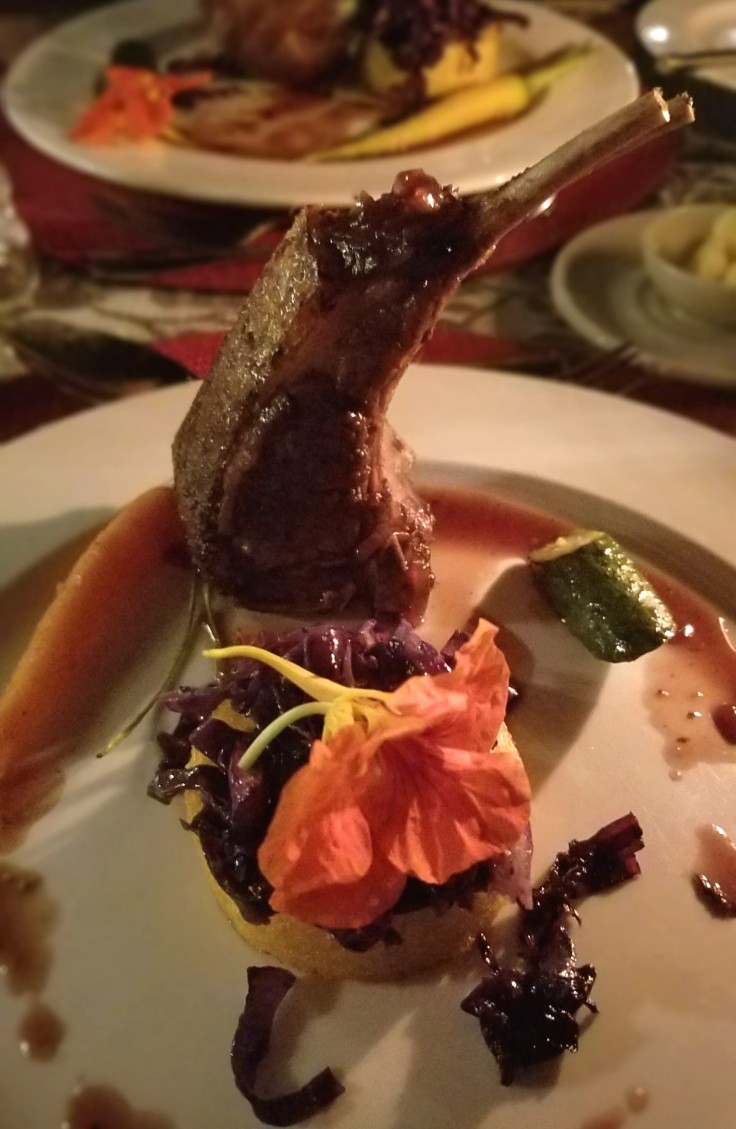 We ate our way through another amazing dinner as the chirps and croaks of the wild night echoed in the distance. I lay in bed later thinking about how easy it was to step away from my life and start over, even if it was only for a few weeks. It rarely feels like a trip, and almost always feels like I’ve slipped into a new chapter of my life. These four walls may as well be my home.