We were already getting on another airplane after just two days in Jo’Burg. The next few days would be spent driving the Garden Route along South Africa’s southern coast. This part of the trip was added late in the game after I unearthed a mountain of information about the beautiful the coastline along the route. The larger challenge was committing to yet another road trip in a left-side driving country. We managed to left-side-drive last year in New Zealand with minimal issue and were feeling unusually confident. I got to be the Guinea pig and do the first leg of driving for the second time, but it was a lot easier finding my way out of Port Elizabeth than the hectic Auckland International Airport last year.

We were on the road after an irritating delay at Dollar Rent-a-Car when the counter attendant became convinced that Katie’s credit card was actually some kind of reloadable debit account because it said “cashback rewards” on it. The whole ordeal involved a call to somebody’s bosses’ boss while said attendant waved the card around like a pop-up fraud investigator. Note to travelers—South Africa does not have cash back credit cards. Apparently, they look fake.

I picked up left-side driving much faster this time around. I learned last year that spacing on the road is a challenge, as your instinct is to drift left and away from the center medium. That, and flipping the windshield wipers instead of the indicators since all mechanisms of the car operate in a mirror image. Today was our only real “bad weather” day of the trip, with rain and fog blanketing the road. Weather here changes quickly, and you could be sitting underneath a vicious downpour with wind tossing the car around one minute and piercing sunshine the next.

The other interesting part about driving was the unofficial passing rules. N2, the highway that runs across the entire southern portion of the country, is mostly a single lane in each direction. Trucks drivers do not speed the way they do in America. In fact, they consistently stayed 20km under the limit while average-sized cars whipped by them in a frenzy. Because of this, passing is crucial. It’s common to see trucks drift more than halfway into the left shoulder in order to allow cars behind them to view oncoming traffic and pass accordingly. If you hesitate, the guy in the car behind you WILL pass both you AND the truck in front of you before you have time to indicate. Driving tip—if you see a truck on the other side of the highway, keep an eye out for overly brazen cars driving behind it that may move into your oncoming lane to pass at any moment. Try not the panic—close calls become part of the mystique.

You can also be fined 500 Rand (approx. $35) for feeding baboons. There are signs all over the highway letting you know.

Today’s drive gave us our first glimpse into the repercussions of South Africa’s drought problem. The country has had a water shortage for months that has only recently begun to improve. Forest fires are still a problem in the area between Port Elizabeth and Plettenberg Bay, and we drove by several large swatches of land that had smoke wafting eerily from dense brush along the highway’s perimeters. Other than this, the drive was generally peaceful. We wove through rural countryside dotted with cows and farms until rolling into Plett in the early evening.

We arrived at 5th House B&B on a quiet road by the water. The name comes from the fact that it was the 5th house to ever be built in the town. The family that owns the B&B was exceedingly friendly and excited to meet us since they never have guests come from America.

“We have an American flag somewhere around here that we could fly for the day!”

The house was beautiful—light, bright, and crisp but with that homey smell of old wood. It was nostalgic in a way that I can’t explain. The second-floor deck overlooked the bright blue waters below and gave you a chance to fill your lungs with ocean air. 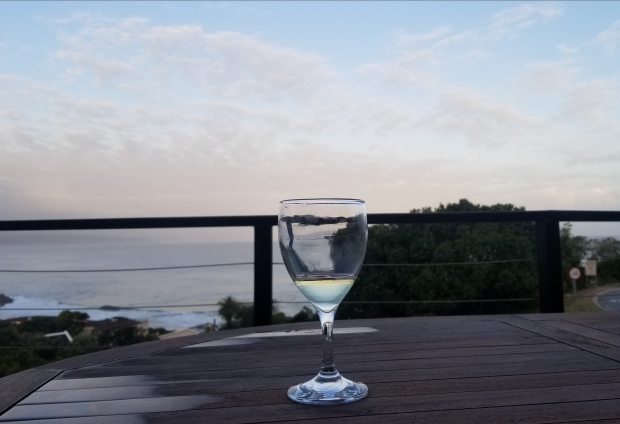 After sunset, the town got dark except for a sprinkling of lights from houses and a few restaurants. Armed with a flashlight from our hosts, we trekked down a steep hill to the waterfront and ate our way through a mountain of seafood and cold beer. It felt right to be away from big cities and on the road again. It’s always the easiest place for me to be.