Ahhhhhh…back on the road. It’s just like coming home. This trip was somewhat of an afterthought once we had secured dates for our bigger excursions in the spring and fall. I wasn’t sure I could go a year before coming back to the Southwest. July is far from an “ideal” time to visit Arizona, Utah, or New Mexico since the average daily temperature hovers around 100. I have vague memories of visiting my grandparents in Tuscan as a child, and how opening the front door felt like climbing inside a preheated oven.

I am a slave to my office holiday schedule, and with a day off for July 4th already, I was able to swing a 5-nighter by sacrificing just a sprinkling of vacation days. The plan was to drive from Salt Lake City to Albuquerque in an L-shape, getting lost in sand-tinted mountain ranges and backroads void of GPS.

We landed in SLC with little time to do anything except flip through motel lobby pamphlets and pass out to the sound of a scratchy TV.  Outside the quiet window were pale pink mountains. There is nothing quite like slipping into the perfect comfort of a bed far from home.

The drive from Salt Lake City to Kanab, Utah is 300ish miles. We picked Kanab for our 4th of July destination because it was the largest town within a reasonable stopping distance and we wanted to see some small-town fireworks. We planned to follow GPS directions for the first leg and then deviate to the southeast and take a more scenic route. The first mistake of the day was making a *quick* stop at Walmart (one of 6 in the area). Girls from NYC cannot handle suburban Walmarts. We got lost in a sea of 50 cent road snacks and $5 tank tops that we absolutely had to have. The most critical purchase was an 88 cent gallon jug of water that we chucked in the backseat in case our car broke down in the desert.

Open roads awaited us, and eventually the density of the city faded into open land. We blazed down Route 15, then shut off the GPS, took Route 50 to the east, and then Route 89 to the south. Route 89 wound through a mirage of tiny towns and gravel side roads.

We ate lunch in the barely-there town of Circleville where the owner chatted with an elderly man eating ice cream at the counter. I inhaled a juicy cheeseburger and crisp cup of lemonade as the server told us about serving breakfast in the street that morning so that folks could watch the Independence Day parade.

Down the road we saw a little sign for a “historic marker”, so we made a B-line for the turnout at the last second. It turned out to be Butch Cassidy’s childhood home, an unassuming collection of wood cabins on a whisper-silent stretch of earth.

By early evening, we rolled into Kanab to check in at Parry Lodge, a well-maintained throwback motel with a history of famous guests. The sun was getting lower in the sky, but the heat was still piercing. I huffed and puffed as we walked to dinner at Peekaboo Canyon Wood Fired Kitchen, inhaling my ice cold draft beer with pure satisfaction. We didn’t know that the restaurant was all-vegetarian, but all meatless-ness was forgotten after biting into a stack of yellow tomatoes with mascarpone and balsamic syrup chased with thin-crust pizza covered in shishito peppers and glazed “ham”. The tented outdoor seating was worth sacrificing the sweet, sweet feel of air conditioning. 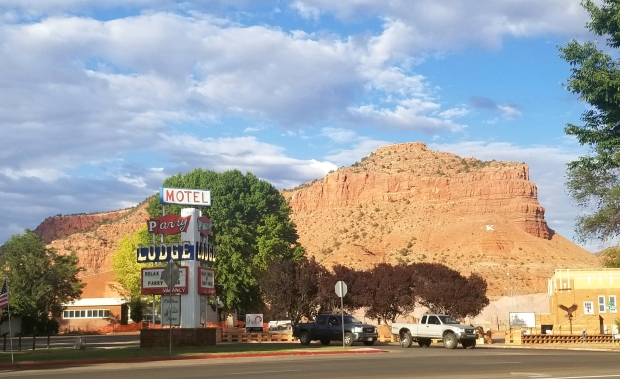 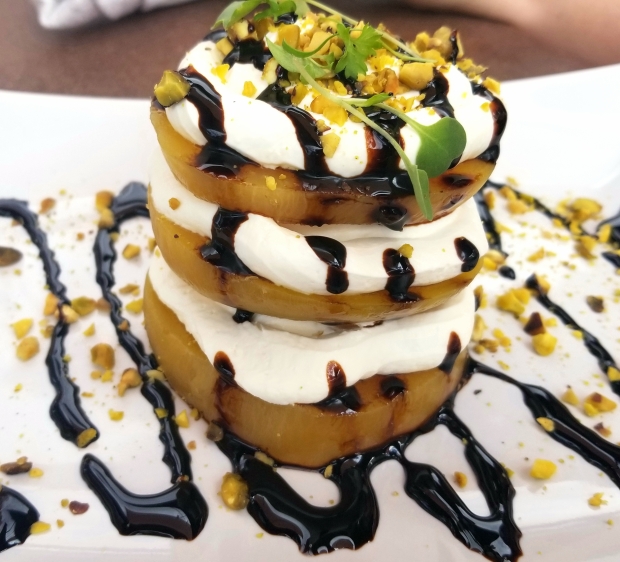 Kanab hosted a 4th of July festival in true small-town fashion, with food stands serving greasy burgers and families sitting on picnic blankets in the park. We waited on line (for half a lifetime) to get birthday cake flavored water ice drizzled with condensed milk to quell our heat exhaustion. Eventually, the fireworks started. Every blast illuminated the red rocks in the background and the silhouette of a nearby windmill. 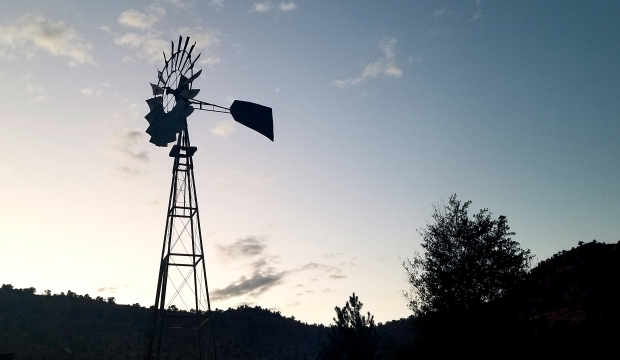 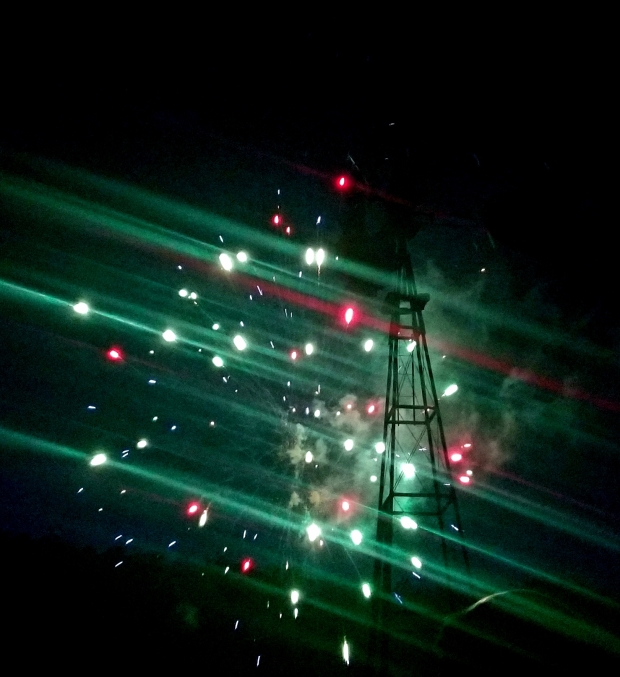 We twirled our 50 cent Walmart glow sticks and ate through a bag-and-a-half of sour gummy worms until the last firework lit up the sky. Maybe it was the heat, or excessive sugar crash, but I slept like a lead brick that night.