Our rafting clothes did not dry overnight in the truck. I started my day off with a damp hiking shirt and even damper sneakers. This morning we went off to hike the Long Point Trail, a 3.2 mile loop that offers an awesome view of the New River Gorge Bridge. It was a Monday, so the trail was quiet when we got there.

The bulk of the walk is through a well-groomed path in the forest, with little noise beyond the sounds of birds and squirrels crunching through dry leaves. We met two friendly older guys working to build a wooden bridge over a muddy patch of trails who called us “ma’am” with a tip of their hats. As we got closer, the trail narrowed and cut through patches of trees that loomed low over the pathway. 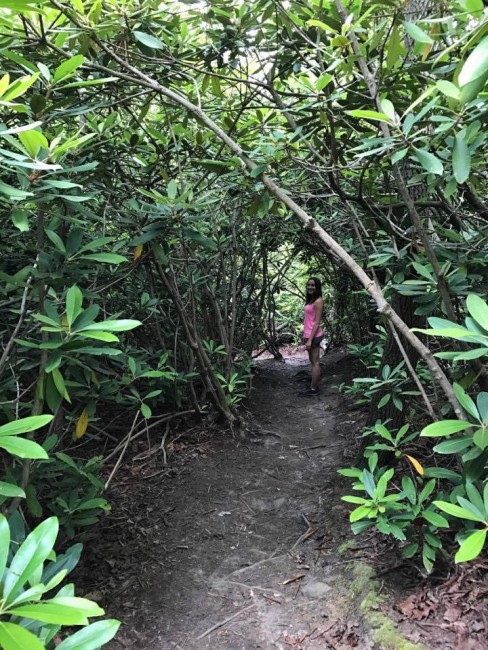 Finally, we started to see sky. The pathway leading to the final viewpoint had sky on both sides and short trees alongside it. It felt like walking into the clouds—nostalgic, like a dream I had and couldn’t remember. The trail opens onto a flat rocky area with sweeping views of the bridge in the distance, and smaller viewpoints of mountains along the side. It was so vast it was hard to process. The air was still and bugs chirped and clicked through the trees. The hills had tiny, almost indistinguishable structures tucked inside the dense forest. Our truck and the highway felt a hundred miles away—it was hard to leave that kind of peace.

Technically, the above photo was taken from the Visitor’s Center, pre-hike

It was a long drive from Fayetteville to Louisville, where we planned to stay for an uncharacteristic 2 nights. We plowed down the highway as far as we could go before hunger struck. My coworker had recommended we stop at Tudor’s Biscuit World, a West Virginia fast-food staple. We probably passed 7 of them on the highway, but it was only when we were ready to stop for lunch that we discovered they close a 2pm. We probably missed it by 15 minutes. No road biscuits for us. Crossing into Kentucky (my 48th state!), we settled for corn dogs at Stewart’s.

After a long haul, we rolled into Louisville (pronounced “Loo-a-ville” by locals). The Econolodge downtown turned out to be the best value, despite a bit of a walk to bars. We grabbed dinner at Doc Crow’s Southern Smokehouse & Raw Bar, which was supposed to be a staple. I sipped through a mint julep and let the exhaustion from our drive evaporate. I recently discovered a love for raw oysters, to the shock of Katie (and my mother, who thinks they’re slimy) so we shared a dozen. The oysters were top-notch, but my entrée BBQ ribs were only so-so. If you come here, I recommend sticking with shrimp and grits (Katie raved). Not every place lives 100% up to the hype.

Louisville has some great whiskey, but also great beer. After downing a few cold ones at some nearby local spots, we ended up at Third Street Dive, a hole-in-the-wall place on a sleepy street. The plan was to stay for one more drink and play a game of pool, but after meeting some new friends from Canada, the night slipped into drunken mayhem and we crawled home sometime around 2am. I can’t even blame the whiskey.