Today it hit me that we only had one night left in Iceland. I had been in a glorious daze of experiencing beautiful things all around me from the moment I woke up until the moment I went to sleep. I had barely turned on the TV or touched my phone, and that disconnect was heavenly and effortless. We started our day with a quick stop at the Botanical Gardens, a public park in Akureyri and also one of the northernmost botanical gardens in the world. We grabbed a croissant and coffee at the little café tucked inside. The morning air is one of my favorite things about Iceland. It’s so fresh and full, and when I take a deep breath I feel energized instead of overloaded, as I sometimes do back in NYC. I know it’s no secret that city air isn’t the freshest, but it does make it clearer to me why I often feel like crap when I take a walk outside in the summertime back home.

Since we didn’t have time to hit the West Fjords on this trip, we decided to end things in Stykkisholmur, which sits along the scenic Snæfellsnes Peninsula. Once again, the roads opened up the moment we left Akureyri and we rolled over huge hills and twisty pavement with a view for miles. Jutting mountains were so vast and high, yet the bases sat so close to the road. Tiny, lonely red-roofed houses sat nestled at the bottom. Our drive was over 4 hours long but felt easy as we went miles without seeing other cars.

Before getting into town, we stopped at a small mountain called Helgafell, which supposedly holds spiritual powers and is regarded by locals as a sacred place. The small mountain sits on a private farm, but the owners allow visitors to make the quick hike to the top. We parked down the winding road that leads to the mountain and quickly scaled the rocky path to the top (about 5-10 minutes). Legends say that if you make 3 wishes as you climb, that they will come true as long as you don’t speak or look back until you reach the top (we followed these instructions). At the top, there was a jaw-dropping panoramic view of the countryside and distant roads. The clouds were shimmery on the horizon as we explored the crumbled ruins of an old church built in the 10th century by Snorri Godi, a Christian convert who believed in the powers of the mountain. A woman named Guðrún Ósvífursdóttir lived in the adjoining Helgafell farm, and her grave sits at the mountain base. As we climbed back down towards our car, we noticed a small basket of hand-woven wool sweaters with price tags on them sitting on a table, and a corresponding mason jar labeled “For Money”. Trust is a beautiful sight to see. 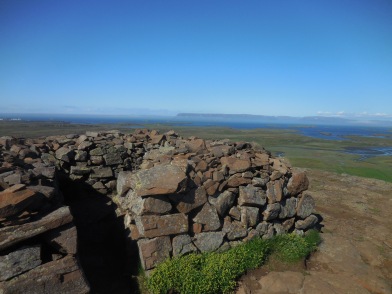 We rolled into Stykkisholmur (one of the towns featured in the Secret Life of Walter Mitty) in the late afternoon, missing our host by a few minutes due to the fact that he was out watching a “BIG” soccer game that was on (you could hear people cheering inside their homes from the street). We stayed with our friends in a ground-level apartment with a separate entrance, so we settled in quickly and went to go walk downtown. Stykkisholmur was a cute, tiny town with only a few restaurants and a pretty harbor. We hiked up a large hill overlooking the water to snap a photo by a big red lighthouse perched on top. 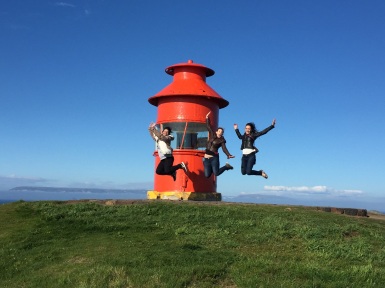 Afterward, we tried to get a table at one of only 3-4 restaurants in town, “Sjavarpakkhusid”, and were faced with a 1-hour wait at the waterside. Knowing that every other spot was equally as popular (read: too small for the tourist influx), we suffered through the frigid, windy air by the water as we patiently waited for our table. It was like a beam of light to see the hostess finally call us inside. We ate our way through some incredible mussels and a creamy Skyr yogurt dessert with caramelized rhubarb (our Airbnb host mentioned in a note that this restaurant sells rhubarb grown in their backyard). The mussels were super fresh and delicious and the dessert was creamy, sweet and just slightly tangy—something unique that I will definitely miss.

That night, I went to bed staring out the window at the clouds. They were low in the sky and fast moving, almost the way they look when you’re flying in an airplane and they’re inches above you. It made it feel like we were in a secret town that was way up high. The birds chirp morning and night here—a consequence of seemingly eternal sunshine? I’d started to notice subtle differences though in the light during the daytime versus at night—the coloring, etc. It’s beautiful in its subtle shifts. The “evening sun” was subtle and warm beyond the fleeting clouds. I tried to hold onto those moments as long as possible, sleeping in a little town so far from home and feeling hidden. I try to hold that perfect complacency in my heart and guard it fiercely. Sometimes holding onto that feeling is so vital to existing that I’ll do all I can to keep it with me—even as I am forced to leave and face the world again, ready or not…