Our plan for the day was to go against GPS advice and take route 305 down toward highway 50, which is known as “America’s Loneliest Road”. We were skeptical as to whether this road would really be any lonelier than the half a dozen middle-of-nowhere roads we’d taken so far, but it was worth a try. We made an attempt at finding ghost towns along route 305 as I saw a bunch listed online, but most of them had little to no remains (short of one that was listed as “riddled with bullet holes”…) or sat down roads that required 4-wheel drive. We ended up just enjoying the emptiness to the route and snapping some photos of a semi-ghost town called Austin which lay at the intersection of route 305 and highway 50. It still has a small number of residents but also boasts many old, original buildings. There’s something about semi-ghost towns which sometimes freak me out more than total ghost towns, because I never know how the current residents will feel about strangers bumbling through their town and photographing things…one just never knows. 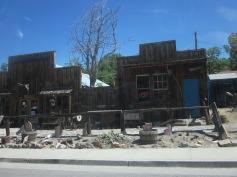 We quickly realized that highway 50 is in fact as lonely as it’s claimed to be. The thing that makes it feel different than some of our rural routes is the fact that you can see so much further into the horizon than many other roads, and yet the towns are extremely few and far between. At one point, we saw a tornado-like funnel of dust rise from the earth and whirl alongside the highway. Further into the emptiness, we stopped to check out some fenced off ruins of an old stagecoach station, but were disappointed when the fencing prevented us from exploring them close-up (possibly due to the nearby government property, which we realized was there because of the low-flying military jets). After miles of road, we entered the small town of Dayton, where we came across the remains of the Rock Point Mill, which had a roughly constructed path around ruins and sat hidden behind a few trees on the side of the road (no sign or legal parking area, almost missed it…parked on shoulder).

At one point, we stopped at the entrance of a 6-mile long dirt road that I personally dubbed “America’s Loneliest Dirt Road”, but chose to abstain from going down it after reading a sign that stated “minimal road maintenance, enter at your own risk”. The road supposedly ended in earthquake faults.

As we got closer to the California border, we took one last detour of the day to stop in Virginia City, a cool old little western style town nestled up a super steep winding road in a secluded hillside. At this point, the car struggles more than I would have liked on steep hills, and we worry that we’ve abused the transmission into disrepair. Hopefully the rental car office won’t chase us through the airport after we return it.

We parked at the top of the hill and walked on foot to explore the little town. Even though it had become fairly touristy, Virginia City maintained a huge degree of “true western” feel and contained dozens of original buildings and saloons which felt, upon entering, like stepping back in time. The insides of buildings emitted that nostalgic “old wood” smell which I’ve always found oddly comforting. We grabbed lunch real quick and perused some supposedly haunted structures before continuing on towards Lake Tahoe, ready (for once) for a change of scenery from chasing ghosts and dirt roads. 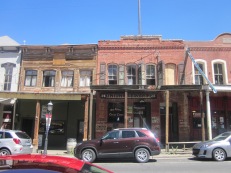