The next morning, our friend invited us to the building where he works in downtown San Diego for a special view-from-the-roof experience that he claimed was panoramic and photo worthy. Unfortunately, he didn’t warn us that in order to get up to said-rooftop, one was required to meander around steaming generators and climb a ridiculously tall vertical metal ladder to a 4-by-10 platform that teetered high over 40 stories. After assuring us that he “does this all the time”, and heart pounding the whole time, we made the climb and got a glimpse of a pretty sweet view of San Diego. 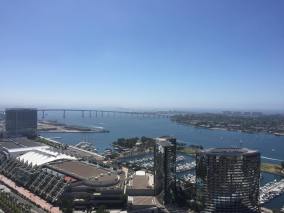 Saying our goodbyes, we drove on to Encinitas to check in before grabbing an Uber to the Kaaboo Music Festival in Del Mar—our road trip finale. Officially, my second Uber ride of all time (and well worth the $14 and avoiding having to play rock-paper-scissors to decide who would be the DD). Our Uber driver, proudly defiant, wizzed passed the mandatory taxi drop-off area and let us hop out right outside the festival’s front entrance. He was from Brooklyn, and we bonded.

Kaaboo was a music festival match made in heaven for both of us. It’s a 3-day festival, and most events like this require you to pay for the entire weekend, but this one sold single-day pass so that we could go on the day when our favorites were playing. The headliners on Saturday were Zac Brown Band (my favorite band) and Counting Crows (Katie’s favorite band). Not only that, but they were scheduled to play one after the other, with Neon Trees and several others just before. No schedule overlaps=no difficult choices=really happy 20somethings.

The festival grounds were huge. For once, I actually used the paper map they hand you when you walk in (and the free travel sunscreen to quell the searing California burn). Not only was the music lineup right on point, but there was a huge and extravagant food scene. Endless tents housed unique, diverse food options like fried avocado and Thai chili & beef dumplings that left standard fair-food BBQ grills in the dust. In one particularly large tent there were live cooking competitions and foodie sections that included stands from upscale restaurants and local chefs, as well as wine and whiskey tastings. I ate everything from pork fried rice, to lamb meatballs, to roasted rainbow carrots with pesto aioli. So totally confused about whether this was a music festival or a screening of Top Chef. 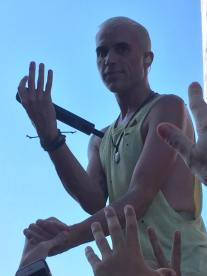 Beyond the blissful array of culinary pickings, Kaaboo boasted a better-than-usual drink selection. One entire U-shaped area was devoted to craft beer, and each stand had choices from different California breweries. We happily sipped away as we found a shady spot in front of the stage where Neon Trees would perform. We were shockingly close to the front as they belted away. At one point, Tyler Glenn was literally 3 feet from where we were dancing, and he looked straight in our direction before leaping into a crowd surf. Like lightning, I managed to secure the IPhone I was holding mid-air to take photos and shoot my hands back up in time for his leap. I touched his shirt. 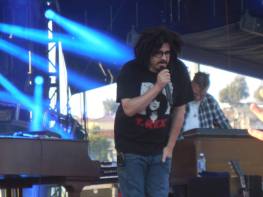 Later on, as the sun got lower in the sky, we stood to watch Counting Crows and Zac Brown Band, both of whom were amazing as usual. Katie has probably seen Counting Crows 20 times in her life, but it’s still just as gratifying each time. We inched closer as they played “Long December”, and after they waved goodbye, we squeezed into the crowd even further for Zac Brown Band. Suddenly, all the cowboy boots emerged from hiding and we were dancing away with the sunset as a backdrop. After we couldn’t handle the sardine-like squeeze of the crowd any longer, we relinquished our prime standing spot and moved towards the back where we could sit happily on the grass. Finishing out the show this way was perfect—swaying to the bluesy beats with the warm air on our faces. 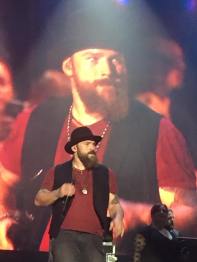 The next morning, in denial of our trips-end as usual, proceeded as expected. We drank champagne for brunch. This wasn’t actually our initial intention, but when we arrived at the brunch spot back in San Diego to meet our friend, they were offering special $10 bottles of bubbly. I don’t care what your plans are, when there is $10 champagne available at a San Diego beachside rooftop bar—you change them.

Sitting on the sand after our brunch-of-bubbles, we gave the sparkling seas one last mournful gaze before calling it quits and heading for the airport. This was our second time on the west coast in only 4 months—we knew we’d be back.